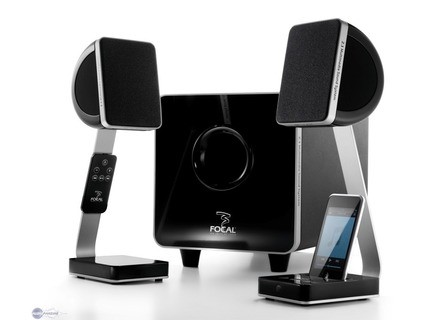 Focal XS 2.1
4
Multimedia material with FOCAL quality (sound and finish), and with a price if not FOCAL than that, what else?
Certainly, it&#39;s not a long time since I took the opportunity, but I&#39;ve had the opportunity to put all the sauces, and he is doing more than honorably.


So I use it for some months, the day I mailed the notice.

Previously I had:
-Miscellaneous Systems 2.1 and 5.1 for PC (Cambridge, Hercules, Logitech, etc ...) who had the advantage of allowing me to listen to something sensible music.
-KRK Rokkit 8: value / price / power, but very cumbersome on a desktop and a nice bump in 400Hz.
-Harman-Kardon SoundSticks II: Aesthetic fun and enjoyable, but lack of aggressive mids and highs if you push the volume.
-BOSE Companion 5: Not at all natural, very flattering to hear mp3 <160, but tiring on the "real" sound.

-FOCAL XS21: Visually, it exudes class, and as many have said, we feel the product created for Apple fans (which I am not), it&#39;s a classic aesthetic (as opposed to Soundsticks , for example.), but classy.

The assembly, if the connection, although classic, seems sturdy, sheathed cables audio are too rigid and must repatriate 2 satellites on the box, while a link between satellites would have avoided going down a cable to the soil.
The satellites are stable on their base, the right with the controls (on / off, volume, remote control receiver, iPod / iPhone dock, aux jack 3.5)
The remote does its job (but with no Apple product, I did not test the player controls). But as the receiver and flush with the base, if the office is crowded, it is better to use direct control rather than trying to aim the remote ^^!
The subwoofer is a bass-reflex downfighting, which is usually a guarantee of good performance, but it practically impossible to ask other than on the ground. It is built tough and does not sound hollow when or plastic "hat" above.

Listening now:
Already, the power, USB, no audible breath, even pushing the volume, it&#39;s a good sign. The situation changes if the input is used, and a better analog source as clean as possible, because the tweeters reproduce very well a breath input.
To listen proper, I was accustomed to the sound BOSE, I was first destabilized the bass were there, but I felt a lack of treble. After a few hours of listening, it is especially these XS21 reproduce quite well the spectrum, so the mids are severely lacking other very often.
In the end, I find the system very balanced, listening at loud volume does not get tired and is well defined with a good image of the sound stage, high mids and never aggressive treble, midrange, rediscover the voice / chants, clean bass, punchy, even in the infra, provided not to the volume of the box beyond the 2/3 after it becomes rough and that any imbalance.
This system is used primarily in media myself, but it stands up very well as for listening to validation of a mix, I found the sound I have in headphones with the ATH-M50, with the presence of "physical" of basses and more.
Besides speaking of headphones, the system has no dedicated output, which is a shame, because the DAC is efficient, using headphones might have been quality. (But I think FOCAL does not feel like anything is plugged in output at the risk of not finding the sound terrible through no fault of their own provided)
Another small problem, latency, but insofar as it is not a product dedicated to the home studio, we can only regret that it is so important, but not be blamed the builder.

Goodies:
The quality, the sound pretty well balanced that can satisfy most amateur users.

Cons:
The lack of a headphone jack, audio cables too rigid.

Quality / Price:
Some say it&#39;s expensive for PC multimedia, but it&#39;s still the FOCAL, quality and sound are present (the C5 BOSE cost me as much, with its much more "chemical" in the end) . If it had been FOCAL Apple would have had to add another 50%: D
For me, the quality / price is correct. I found a few that I had with the KRK, less expensive, less bulky, prettier, a bit more neutral, but with less power and more latency. I consider myself a winner anyway.

I do it again this choice?
For the use I have without hesitation, provided that FOCAL added a headphone output, because we want to take advantage of electronic FOCAL (especially Burr-Brown, actually) without waking the neighbors!

Other Focal other Hi-Fi Products