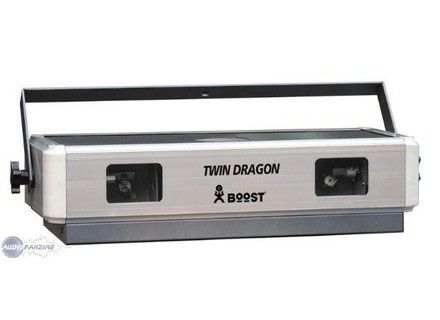 mrdark's review (This content has been automatically translated from French)

Boost Twin Dragon
2
Personally, I use a boost twin dragon, it is true that after three hours, the LED passed away, but the after sales service very well, it sure has not break 30 mw of bricks, but this time the, what did sell that are material to the pro, crest audio amplifier 4000 euros each, chateau Montarbo 40,000 euros, there's that same Wipe discomobile, given that no one will have the means to pay anything, well I guess, good evening madame for the animation of your wedding, we offer the closest discothque, no dj, they do not have enough money to of stuff. it takes for all tastes for many amateur is not an excellent product but it works or anything, start small to prosper, I'm not criticizing any marks all have qualities and default, I saw varylights slap in a week, 6000 euros a piece fout the balls, and frankly, the twin guarantees for 200 people without blushing or movement of other laser lazer impact 13000 euros, everybody does not have the budget to a nightclub, the wise!
Did you find this review helpful?yesno
»

Boost Twin Dragon
1
For curiosities I invested in a twin boost dragon, I say, a small green laser Cheap is nice, verdict of shit and shit is as unspeakable stuff, slap in the laser After 1 week, guaranteed non-existent, so I put the disassemble to see how it's done. a shame, the son who balladent everywhere, stepper motors not manufacture more than doubtful (there are no two identical engines and one wonders o are the step) son, who plies are inadequate, 11connecteurs on the map, 15 connectors on the water, a short over-water, must all tighten after each use, it is very noisy, 60mW laser power after regis Checker lasercheck home with a coherent, we get 3, 4 mw, 60mW is the power of the infrared diode pass once in YVO4 and KTP is obtained Green 3.4 mw no rgulation of temprature, laser fix with double sided adhesive sive on a piece of fraille not even properly screwed and half of the power passes through the mirrors that are censs THINKING laser and so far, I have no room for everything possible. I finally DCID keep the cash and some matrial and make my own green laser, 100mw rel for wholesale, laser diode infrared 808nm of 1.2 watts mini a good crystal YVO4 the yag being much more expensive and a good KTP crystal lenses of Colima and hop 100mw green laser and rel rgul in intensity and tension especially in temprature (sinks, and Peltier ventilos) all for 1500 euros that is the true price of a naked green laser. therefore résumé I strongly deprecated stuff like boost or mac mah = same shit only the logo change is made by the same box, you may bite into your fingers, no protection against overheating or current circuit, ideal for fucking fire or burn out your gear 2 or 3 passs effects loop, after 2 minutes is annoying to see the same designs, and the worst is that you have very unlikely to have a photo of MODEL, Running boost its old stocks before, so gear improperly stored and rust. I do not even put veusx note on shit, ps rputs the Chinese for their infringement and stuff very very low end, why a change suddenly?
Did you find this review helpful?yesno
»

Radiums's review (This content has been automatically translated from French)

Boost Twin Dragon
1
False data, but kidney beautiful exterior finish in the housing!
A diode laser 5mw greenish announced yet for 20ou 30mW.
build quality dreadful ...
citation test sonomag:
"Trying to keep the screws in the plate a few tenths of a millimeter, some summers have holes pierced properly centered, the wafer which supports the laser diode appears to have been cut with the teeth .."

Seen in demo, the radius diverges widely, can be 10mrad with a spot diameter of 5 cm to 5 m back! any laser product has been so bad in this respect there.
pittoyables performance, quality, appalling customer service non-existent ...
Mistrust: This applies to all lasers BOOST, MAC-MAH, SILVERSTAR, etc ... : They are green, red or black (when walking more sources).
The effects are lousy, they destroy the real-LASER SHOW.

Boost had better change their name, they do not seem to be ashamed to sell and have sold the stuff completely crap in sound and lighting for a long perriode. We all remember the BOOST to 300W to 50W crâment that point, but with an amp that gives BOOST said 2X300W 20W speakers are holding up but the quality of its crissarde geularde and the possible.
Anyway, it's a reputation boost abominable in every mind which the company does not appear to be ashamed ...?
Did you find this review helpful?yesno
»

Other Boost other Lighting Effects & Lasers