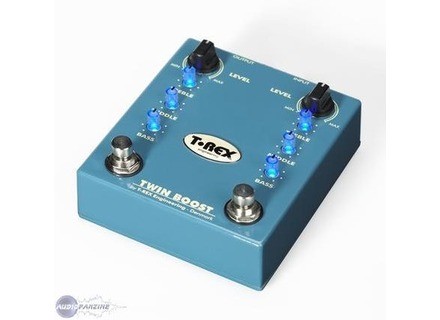 Jp6l6's review (This content has been automatically translated from French)" Clear, practical and versatile."

T-Rex Engineering Twin Boost
4
Both units feature boost EQ Treble-Mid-Bass in one pedal. Both buffs are not cumulative.
I use it as 2nd master equalizer and in the loop (like a volume pedal) or as EQ and gain stage (small) front.
This is according to the amp. As I mentioned in the title, it is versatile.

Super transparent and silent, while serving to increase the volume o)
It does not "push" not very strong. Unless the amp is capable alone, it does not provide a high level of gain, it is in the subtle. We could blame him one of the two boosts does not allow.

In the past I had a double boost Home Brew DOS MOS combined channels 30 dB without equalization. In some ways it was more practical, especially boost gain, although very rude (I wonder if the pots were not linear) and the first of the two channels can be switched in buffer. A machine hell to bandage the metalheads. O) Finally, if I may say so.

I rather regret not finding the ability to push higher input gain, mainly on a single channel vintage amp. Having said that, combined with a good overdrive (I collect them), T-REX is more than enough for my use.

I use it for two years, even at home. When I took the idea to record something, I always do my sounds with an amp and microphones, I do not support multi effects.

Again I had the Home Brew DOS MOS, different design and I have a clean boost independent Box Of Rock, I can earn and there, it can push an entry rather violently floor.

For a pedal T-REX, it is not very expensive and I would do this choice. I bought, like almost all my pedals in the U.S. $, it is much more interesting.

narcifoss's review (This content has been automatically translated from French)

The presentation is very simple and intuitive: volume control and a three-band EQ per channel. I unfortunately bought used without a manual.

As for sound, this pedal is fully transparent with a minimum volume and tone knobs to noon, there is no difference between the bypass and On. I use a stack to boost Orange Rockerverb 50 is very good and can cover a good range of sounds. Only small downside, even with the boost to the bottom boundary is sometimes go to tease the big win that spot ... It is a shame not to combine the 2 channels. I pair with a T-Rex Overdrive and Michael Angelo's great.

I use it for 5 months, this is my first boost per se, I was pretty adept overdrive. This is certainly an expensive pedal, but given the quality of construction (housing indestructible), sounds and the convenience of the 2 channels, it's worth.
Finally, a video I made when acquired: