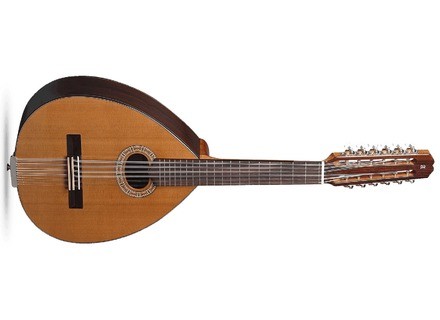 Alhambra Guitars Laùd 3C
5
I bought this Laud, an Arab-Andalusian lute with 12 strings, in 2006 after discovering the sounds of that instrument at a medieval festival.
The table is solid cedar, the sapele body, the mahogany neck and rosewood fingerboard.
The value is great for me because I discovered this instrument in the low-cost instrument I have always sought.
It also allowed me to replace my folk guitar with me for 12-string guitar.
We find the laud in Cuban music, Latin, Spanish and Arab-Andalusian course. Sound as a solo instrument can approach that of the Kabyle mandola.
I made up a piezo pickup so you can use in recording and in concert.
And that is the versatility it offers and for its rich sound that has replaced my laud my guitars and serve me in many concerts to play Irish music, gypsy, Eastern Yiddish, Cuban, Flamenco ...

A tool that I highly recommend, although it will get more sophisticated models on the side of Spain.
Did you find this review helpful?yesno
»