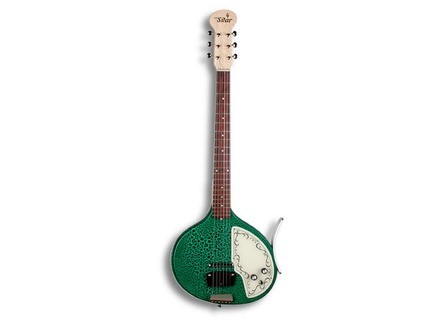 Jerry Jones Baby Sitar
5
The Jerry Jones Baby Sitar is a mini version of the Coral Sitar, offering up a less expensive option for those looking to get an electric sitar sound, or something close to a sitar while still playing a guitar. Let me start off by saying that Jerry Jones has some extremely impressive and unique line of guitars. I've also used the Coral Sitar and the Neptune Baritone guitar, and I've been nothing but impressed by the top quality feel and sound of these instruments. As far as the Baby Sitar goes, it has the same great feel and sound of the Coral Sitar, but in a smaller body. The only major difference that I can tell of between the two besides the size is that the Baby Sitar doesn't have any sympathetic strings and doesn't have as many setting controls, although the Baby Sitar does have tone and volume knobs for the single pick up. If you've never played an electric sitar, these things are just so cool overall. The Baby Sitar in particular has a very realistic sitar sound that is the perfect mixture of the sound of an electric guitar and the sound of a real sitar. It even has a leg mount for holding this up right like a sitar. While the Coral Sitar definitely has a fuller and more realistic sound in my opinion, the Baby Sitar has an awesome sound of it's own as well. Although it might not have the sympathetic strings to give it some drone, it still sounds incredibly like a sitar. If you can afford the Coral Sitar I'd recommend going with that, but for those who are looking to save a couple of bucks or who might not need the full Coral Sitar, the Baby Sitar is the perfect little electric sitar, not to mention how awesome it looks!
Did you find this review helpful?yesno
»

Other Jerry Jones other Plucked Instruments