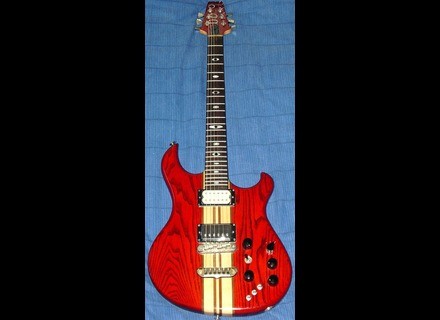 dabclod's review (This content has been automatically translated from French)

Aria Pro II Original Custom Body TS-600
5
Guitar made in Japan (I bought mine in 1982, I think), 24 frets frets rather low and wide.
Originally there are two micro Di Marzio. I kept one, and replaced the neck pickup for a Di Marzio PAF.
There is an active electronic booster that allows the guitar to split the two microphones series / parallel, and put microphones in reverse phase to the center position. 2 9V batteries. I forget probably because ...
=> I "fired" all of that pretty quickly because it was too complicated for me, especially the batteries had a tendency to "let go" during a concert, or just before. Since we must use the screwdriver to replace ... I only have two microphones, one splitable, Volume, tone and choice of microphone.
It would start over again, I would do differently and try to find a direct output (bypass the electronics) to have sound all the same if something goes wrong.
Metal nut. Cordier very well studied.
I noticed that this guitar was used at the time (among others) by Andy Summers at public concerts of Police.

Handle very nice. I postponed the belt clip the tip of the horn before, to about level 17 th box (on the back). And with the strap, the guitar is found a little remote forward. This allows me to place the wrist on the tailpiece and play between the 7th and the 15th (approximately). This is my area of ​​choice.
One reaches the highest levels correctly, but for the 24 th I play mainly on the Si Mi or
The game at the top of the handle, side saddle, is more difficult, but doable: Because of my manip. the arm is extended, and cramps are favored. Involves sitting, it works better on top of the handle.
It is a very heavy guitar.

I play with a Digitech RP-7 on electro-acoustic amp Roland Cube 40 Watt, which is enough for now. I also played on Hinsley 50 Watt and I was very happy.
I like the sound, even if the saturation obtained by micro acute home lacks a bit of volume from the neck pickup.

The different sounds obtained with the active electronics recall a little Gibson L6S.

Now, as I have "tinkered" is fixed as his, but that's enough for what I do now.

Pretty, elegant, except weight and appetite in a stack, the original model still seems very current.

gaelski's review (This content has been automatically translated from French)

What a great gas factory ...!!! but of possibilities if you look above at least ...

The handle end is really nice, getting started is easy ... despite the importance of access to acute on e and b is easy but if you want to get tough on strings played worse.
The guitar is heavy but good few pumps, a good warm-up and you do not feel "almost" more than its weight, the more it remains balanced.
As I said above you have to lean on and look a little dumb to understand its mechanisms, but after that find a "good" sound becomes a treat.

The ITS ...!!! it is very versatile from its pickups and active electronics, you can easily switch to a jazzy tone overdrive much drier and rock up to 3 settings (change pickups -> activation of electronics -> key change ) when it is on full concert in one piece provide a better pedal but between two pieces is really not death ... from jazz to punk to funk it can "almost" do it all ...
I play with a 150W amp Montarbo, so even if it is not a reference amplifier as old as the guitar forcment provides a very distinctive grain ... but the guitar was also shot on different amps like fender and s 'came out really well the matron.

This is the model on which I learned to play guitar so it's always a favorite for me and I do not think I will change the overall guitar amp, I love that color, sound, his "mouth", the short side roots but so modern in its poylvalence ... everything is good
As for value for money I do not know his current argus but I know I've done a great deal when I bought it with the amp for 200 € ...
I love my teddy is a little
Did you find this review helpful?yesno
»

Topprog's review (This content has been automatically translated from French)

Aria Pro II Original Custom Body TS-600
5
Japanese.
Purchased used in 1988 for my 30 years, impossible to know the exact year, it's just the latest version and that manufacturing was stopped in 1983 .......
This guitar still surprises by the number of switches .....
For other features, see the notice below which I add:
The finish is perfect, the varnish very strong at the bridge and nut (brass ....) just exudes strength, and is actually strong, because since I have regrets that I did not fall untimely Tone switch!
The wood used, maple and ash are of excellent quality, the ebony fingerboard is rare on current models and mechanical impeccables.Seule color, natural wood is a bit dated, but surely it will come back one day!
Accuracy: the pickups are humbuckers brand Protomatic Series 3.

I have not weighed, but compared to a Start is actually heavy!
The handle is very comfortable to play even sue the 24th box.
To get the sound you want instantly see below ....!

First, I have somewhat abandoned the boost switch for two reasons: 1 - the sound is really hard and somewhat rough, slightly used (maybe it's the "Thor sound"? 2 - forget you when to turn it off an hour after the battery is cooked!

After the sound palette is huge with all other combinations of switches (one e-top is not nothing to do with the weight of the guitar. Overall I would say that given the configuration of the microphones and any proportion of prices are kept is closer to Gibson or PRS as Fender. Having said that I came to find clean sounds that can evoke a telecaster ......
This beautiful instrument gives me the best of it even with both pickups together, the switches set to "high" a distortion sound very hot and also very "readable" regardless of the level or type of distortion. In this position, the sound is very clear and sounds very full hairline.
Of course, if you want a more distinctive, you must visit the above-mentioned brands, but it is more expensive. Or change the pickups, which is always difficult ....
In short, a real versatile, but requires hours of "research" if you want to fully exploit all the sounds.

It's very emotional with this guitar. By 1978, the first time I saw these guitars I freaked out but I had not enough money to pay me .......
My wife bought me a hand in 1988 and since I have not played on another guitar (in addition to being left .....).
Yes it has the mouth that guitar with all its buttons!
More reasonably, I think that, this model is sound and even surpasses many current Japanese models around 1000 euros (the rating of this instrument is around 300 U.S. dollars !!!). Now I play almost exclusively blues and I must say it's fine for that.
At almost 50 years I think I'll make some infidelity (in my Aria, not my wife!) And get a Start U.S. (we can only love the Start sound as a guitar is used in all styles, so really versatile) whose price continues to decline. That said, I repeat always enjoy my old Aria TS 600, which I'll pass it for the world!!