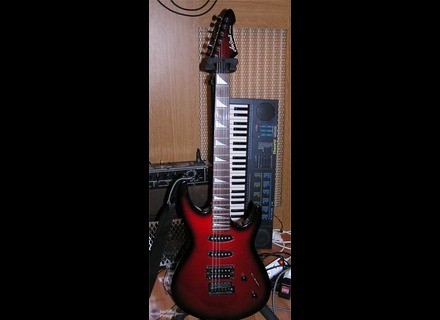 Frets: higher than on a guitar shred. Merit may be a slight work to reduce their height.

Pickups: SSH. Not exceptional. Only the midlle pickup sounds not too bad.

Very good overall quality of manufacture. This is a guitar that ages very well. 9/10

Neck: Slightly less comfortable than my Ibanez S770FM but when the action is set very low it behaves very well !

For sound:
------------
I made the choice to finally change all three pickups.
Current configuration:

Neck position : Seymour Duncan Little 59 (splittable humbucker). The tone knob had already a push-pull switch, I decided to split the neck pickup through it. Single coil mode (split) it sounds pretty strat mode and not split it almost sounds like a (Gibson) classic 57 : very hot and quite clean jazz.


With this combination which cost me an extra of less than 250 €, now I have the most versatile guitar of my collection.
(To be precise) in addition to the Aria pro II, I own :
- Ibanez S770FM (2010)
- Epiphone Les Paul Standard 1995 (Made in Korea) on which I put a Gibson Classic 57 in neck and Gibson Burstbucker III bridge
- Hagstrom HJ500 2008 on which I put a Gibson Classic 57+ (neck) and a Gibson Burstbucker Pro (bridge)
- Greg Bennet Royale [sammick] (1) 2008 on which I put two Gibson Classic 57
- Fender Jazzmaster 1962 (my birth year) Fiesta red on which I did not change anything.
- Gibson ES-335 1974 sunburst (I would have preferred a Cherry one, but it was difficult to find). Same, I have not changed anything.
- A Squier Strat 2007 sunburst (model copied from those of the 70s, with a large head (like J. Hendrix's) and rosewood fretboard on which I think I will not change anything except maybe the color (because we see that the body is in 4 parts (the wood veins do not match well) : this guitar is a bomb. I bought it used for 150 € with its 15W Fender made in USA! The big clean sound. A little less good with an overdrive but this may be because I'm too used to the Gibson style humbuckers and I have not found the right tunings ...

To say it again, the Aria Pro behaves very well compared to her friends, especially since the change of pickups making it quite a friendly and versatile tool.

I forgot: unlike others this guitar is well (weight)balanced. Some others have a propency to lean headwise or bodywise. In terms of comfort of play, it is a very important point to take into account, not only when playing with the guitar on the knee but also in standup position (with the strap) !

Without modification, not too bad : say (generously) 7/10. The single coil pickups are pretty warm. But when you have tried other guitars, you can feel that something is missing.

I play a lot today with a Roland Cube 80 XL, otherwise I like my setup with VOX Tonelab ST pedal plugged into two stereo amplifiers coupled Roland KC-550 (stereo) (=2x180 Watts RMS on 15 inch + tweeter, so a sound of great thickness in low volume)

I love this guitar.
My daughter did not want it to because of the color (you know, girls!)
When I decided to look into it seriously, and I tuned it (tuning of the voltage Floyd tension (it had moved ater these years) + intonnation and tuning the neck) for it to accept 10-52 strings set.
"She" behaves now very well and sounds much better than with the 8-43 strings set&nbsp; in place when I purchased it.
Since the pickup change&nbsp; it became THE guitar that fits everywhere. She follows me when I move.
So: 9/10 to 10/10 as the overall score, taking into account the durability. (She is 20+ years old ...)
Did you find this review helpful?yesno
»

Toufynou's review (This content has been automatically translated from French)

Aria Pro II VP-40
4
I possde a cherry color sunbrust viper series: it's beautiful ^ ^ made in Japan, 22 frets with floyd basic for vibrato. Adjustments 5 simple selectors with no micro brands: p but the little extra for the price it is wood, the neck is so smooth and enjoyable mahogany and rosewood fingerboard and Basswood body.

Say anything for the handle, the easy high notes of CASC, normal weight for a full lctrique. Easy to play.
The sound is great except that I think has changed the micro soon they do not suit me at my

It is suitable for rock punk grunge mtal ... I possde a Fender Super Champ XD and a Vox Cooltron Double overdrive. It's really great for everything and everything solo.
This gives a bit of all the sounds when you know with rgler but are low-end micro

I have been using ^ ^ The beginning is ending for four years, I love the guitar in it even than his microphone. I tried so many models before finding one that I needed: p
The report price is quality standard.
This choice I would do if I give a little micro kit: p
Did you find this review helpful?yesno
»

Booker's review (This content has been automatically translated from French)

Aria Pro II VP-40
4
The guitar I have is a Made in japan, are dated milieud 80 years.
It's a 22 frets, SSH configuration micro, micro unbranded apparent.
The bridge is a Wilkinson vibrato type.
On my guitar the electronics only works when all the knobs are at the bottom, and there a microphone selector 5 positions.
Basswood body
Mahogany neck and rosewood fingerboard.
The color is a red to black fade on the shores of beautiful effect (see photo, it's mine!)
I stuck him a 11-52 set of strings it supports very well.
The mechanical oil bath and very accurate, but there are no visible marks.
8 / 10 for the electronic terrible.

The handle is extrêmenent end! This is my first guitar but then I tested strat-type guitars, and the handle is more comfortable than these!
The frets on mine are very low (less than 1 mm), it's quite convenient for slides on the handle but this can be annoying for other styles of play (tapping).
The aces in the 22nd frets is very easy.
The weight of the guitar is moderate, very comfortable, neither too light nor too heavy.
I mostly handle configurations Micro + micro micro environment or just double, I think here's a vintage super creamy and its really clearer and stronger with hambucker.
8 / 10 for freight

Me playing a few rides SONC lair, a lot of Dire Straits or Iron Maiden, the sound is not bad at all but it is true that the pickups are rather vague.
I played with a modeling amp (VOX AD15VT) and a 100W amp head Marshall (MG100 HDFX balanced on an amp and speaker monitoring) and the sounds are pretty good.
7 / 10 to the microphones but are fine for basic use, for those who do not play a lot of metal. I play a little and the sound is not great (the marshall)

I have this guitar for a year now, I can not part with it but I think passing on an Ibanez with a floyd and 24 cases, to extend my playing style and my palette of songs without inateignables last 2 freight.
It likes the most is the neck of the guitar and its esthetic, what I like least is the electronics and microphones.
I chose this guitar for beginners, also for the esthetic. I tested before copies strat but I preferred by far the, the more sustain is huge!
Excellent value for money to start, without being too demanding on the microphones.

If I had to relearn the guitar, I do it again this choice with his eyes closed.
Did you find this review helpful?yesno
»