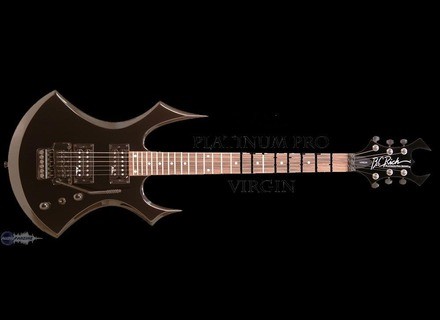 123Dinendal's review (This content has been automatically translated from French)

The biggest feature of this skyscraper is his body cut through hell itself! She looks at your breath away and it is difficult to find as more violent guitar. Original level, it completely breaks the traditional Warlock and other Iron Bird.
In addition, it is completely black, even the back of the handle is painted and varnished.

In short, for uncompromising metal, it kills!

In addition, it very well equipped as Pink Floyd, 2 humbucker, 1 volume and 1 tone.

The handle is very correct, I will not say nice but not difficult to get. I was a professionalism that Jackson was less accessible.
Access to acute is classic, no more, no less than a start.
on the other hand, get used to the shape of the body, it has nothing in common and it takes several hours to find its footing.
The sound comes on by itself when we know what we play, we need to find the sound very quickly.
on the other hand, it is necessary that rconnaître handle falls complicated is to play long. Indeed, the body is lighter than the handle and it therefore tends to let go. Therefore in the permanence up while playing. Or, push forward with his right hand on the horn upper body which is automatically set. In short it is frankly not critical and widely playable but after 5 hours of repeats, we're happy to be back on a Gibson on which it must produce effort

The gameplay of this skyscraper is true to his image, but hard exitant so!
Seen because the body is light, we really what we want! we play at arm's length, we set playing, there is the body to head height, is placed sometimes on the left leg, now on the right ... In short level sets the stage, it explodes to death!

Like many (see all) guitars that level, if the sound does not fit, do not hesitate to change the pickups!
This is fortunately not my case, I play on Hughes & Kettner Vortex with Boss GT8.
Was at hand, a guitar that comes a huge sound in the bass and play a rhythm with a power that few others will not scratch most standart. Besides that, the acute tears not bad either, you just use the right microphone.
Let us be clear, n'espérérer not say Stait play with! Here I talk about large metal (Death, Black, Power, Hardcore ...).
Personally, my game requires me to get a big sound without acute Hide tunes that I play along, and although the selector to the center position, so I use the two mics at once, and c ' left. I still limited at that time if want to go in a solo, but since I play alone, it rarely happens. If necessary, the configuaration 2 guitars (one rhythm, one solo) allows for the heavy and sharp!
The clean sound is nice but still relatively deaf (deaf over a Gibson Les Paul Standart but it's not a bass !!!).

So at his very very good for my style.

In short, in conclusion, I have used it for one month and I am super happy. The value for money is exceptional I think if we want to get a big metal sound right away without taking the head with the effects ... I put 5 times more time to find a sound that I liked with the Gibson with BC Rich. I'm long on a Warlock and it has nothing to do, the Virgin is 10x more manageable and manipulable (cf. games scene). In addition, the issue much more original look.
It is also on it is less accessible gameplay level but once the marks found, it is one with. She and aggressive by Biai again