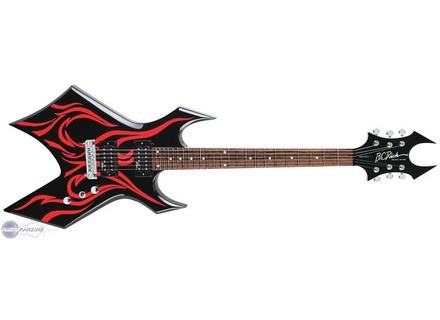 bloodjob's review (This content has been automatically translated from French)

B.C. Rich Warlock Metal Master Tribal Fire
5
Agathis body (not necessarily what I prefer), flat handle and relatively comfortable 24 frets, two humbuckers made in bc rich not too bad as versatile a killer look that needs no introduction, the model Kerry King played on stage with Slayer, there was not much to me. Tone, a volume knob, switch 3 poistions and go for the single-neuron triplet!

In use, I would so only subject to the final. The handle is a damn good surprise and even shred the handjob can be considered. My big bear paws can go up to the 24th fret easily. Say it! The look of wild appeal or not, but it is clear that when we say I play metal, I always think of this guitar first. Only fault is that? Trying to mount strings pulling 56-13 and weep. The handle did not like it at all bridges and the bridge were not large enough to receive such cables. Finally, if you are planning tunings two tones below without spaghetti under your fingers will have to checkout and buy wraps around a lil more mechanical in the bluthier to change the bridge. In "normal" tie it stood rather good agreement.

Well, we do not play ballads fireside, unless you like with the timing delay. So, it proves to be rather nice original in all registers, and the original pickups so often criticized by metal purists are ultimately very nice for little that is not difficult. This is obviously something that I quickly changed for a response and fishing more in line with my game Traditionally, this kind of monster is more consistent with active EMG, which I hate, too, I mounted seymour duncan assets significantly less cold but less "powerful" less straight forward. That said, ca severe oats. It really helps to address all styles but the bite of the active micro requires me to have a super clean Thurs And that is not necessarily the foot.

Three years since I played it. It was a lil concert and since I bought it, I put it to new microphones, grover AD mécaniqued purchased sixty euros, significantly more beefy strings (elixir, my favorite brand). I would not recommend this guitar as lovers of the brand. Other complainers who are ca cheap or always gratounettes compare these to what is best in value for money or that I know devraie't rahbiller go and stop playing with christophe maé leut cap fashion. Here, you buy the guitar man, who loves the hairy greasy hair and black.

More séroeusement is a super affordable guitar that can evolve and that is a very good basis for future custom serious. There will be two camps anyway: those who see it with a good and active emg floyd, and others who la.laisseront as is unpretentious. Less than 150 euros in good condition OCCAZ, we find, and it seems to be a great value for money, even new 250 euros. Attention to the teeth at the bottom of the instrument ... by placing it on the ground without protection, paint pete quickly and wood eventually be attacked quickly, ruining the guitar in the long term. Watch out for it if you buy OCCAZ.

Angrod's review (This content has been automatically translated from French)

-Guitar has a beautiful shape and tribal make it very well. For my part I changed the rack and mechanical black because I find that chromium did not make her very well.

Channel-very nice, no complaints.
-You can play seated without problems.
-Very good access to acute.
-Not too heavy.

-Cons By paying attention to the tips of the body because if she falls or something spikes are easily broken.
-The high E string tends to loosen the nut.

I do not really like these pickups, a little too sharp for my taste, and not enough bass, a rather guépeux'''' incisive'' and'' I prefer the pickups a little colder.

-Very good guitar for beginners amateurs or why not. It will still change the pickups in my opinion, but other than that it is a very good guitar to devastating look, quality / price ratio exellent.
Did you find this review helpful?yesno
»

spicekiller's review (This content has been automatically translated from French)

Channel a bit too wide but I got pretty fast.
-The ACCS is optimized thanks to the acute form of the body.
-The balance of the guitar and pretty bad, it's a quetions usual, the handle falls when it is played up a little too high, if we play down the problem s'attnue trs a little ..
edit: rsolu problem with a leather strap that "hangs" ...
-It comes out a really big sound surly with micro micro severe acute and trs gives nice deep grave in the clear.
edit: it now has two emg (81/85) and has literally transformed the sound of the guitar, the capabilities of the guitar are dcuples, the sound is closer to esp.

-The sound should total all styles o rock mtal words appear, it is unquestionably a killer guitar ... lol
-The addition of EMG provides a much clearer DEFINITIONS, his most incisive and equilibrated prcis very good thing to do on this guitar is worth it!

"I used this guitar for about 2 years, I just change the original nut for giving me so drop in, the strings do not fit the indoor
- Great value quality price with a look of hell, it looks really a guitar at 1500 euros ...
-I Refer this choice without hsit
Did you find this review helpful?yesno
»

hanzyoyo's review (This content has been automatically translated from French)

B.C. Rich Warlock Metal Master Tribal Fire
4
A Core-making it seems to me that BC Rich implants are well over there
-24 Frets with BC Rich humbuckers I know the models but it marked the official site
A fixed bridge-no-name
-1 Volume, 1 Tone and a three position switch
-Regarding the handle I know very little except that he is malfoutu

-The handle as stated prcdemment rgl is poorly and has a great tendency to nose dive when playing standing but the effect fades with a leather strap
-The ACCS is not that great to acute but for the price and then make the big Death nag you use it too ^ ^ Mi
Rather heavy-but even when we suspect saw the head of the hatchet, the advantage is that the feel good the beast, the shape is a matter of personal taste j love her face and it feels good effect on stage
For me small-level guitars that rarely touch more CHRISTIAN sound perfect for me knowing that I put EMG 81/85 (Sacrilege but I like some say)

-It suits me perfectly for the moment until we have the level to buy better but I rgale all the time playing with it
-I buy a head amp Randall RH150 G3 on a Harley Benton cab 112 and Dchira my sound as I want between my two groups (heavy sound, thrash EMG81 for one and in large bourrinus sub-bass to the other thanks to EMG85)

I use it for 2 ½ years and what I like most about it is I think his charisma and his thanks to EMG and its what I like about it is its least comfort and quality of its wood
"I had not tried other models before because i was falling in love with its looks but now with more exprience (not much either ^ ^) and knowing I not think his report qualitprix is ​​the best on the market mtal to the fact that much of the price of BC Rich on the bottom lines of its design has to go so I do not think I will ever be the choice t if I had more sense and I will opt for a Jackson or Ibanez
Did you find this review helpful?yesno
»
Read the 6 user reviews on the B.C. Rich Warlock Metal Master Tribal Fire »