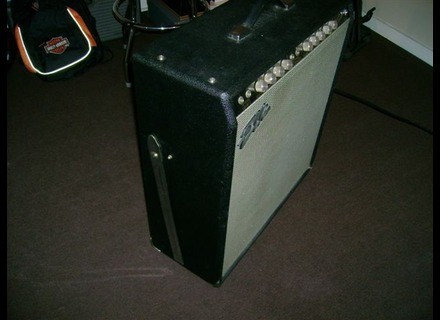 Elk Guitar Man
5
Japanese combo produced between 1963 and 1969. EB202 Chassis type common to several amps brand here in its 45 watts all lamps (4xECC83, 1xECC85, and 1x5AR4 2xEL34). Production is point-to-point, very serious. Some damn caps have been changed by the previous owner, who reassigned the craft professionally. 2x12 "alnico of origin, 4 Ohm, Hammond reverb and tremolo. Condition impeccable. Spite of its size, its weight is decent (at first glance, I would say no more than 25 kg).

These same features as the Tremolux Fender. Aesthetically, there is no doubt!

Configuration simple. Just let the amp warm up for several minutes to quickly get a very bright sound while remaining balanced. EQ settings have a big influence on the sound. However, the amp will perform best after 30-40 minutes of play

The amp sounds very Fender period, despite EL34 power stage. The sound is clean, bright and extremely clean even at high volume. The effect of natural saturation did not appear until 7/10, even with a guitar fitted with pickups high output. The bright channel only has bass and treble settings and spring reverb sounds very very surf: therefore, once past the 3/10, it can be overwhelming, especially in the treble. Jaguar with a rise time of microphones, the sound of Dick Dale!

Channel 'normal instrument is less flashy than the channel with reverb, allowing sound rounder, more muffled, but that is not lost responsiveness characteristic of the amp. The tremolo is very clean and generates no noise.

Generally, this type of suit for his country, blues and pop 60's ... but, more specifically, this machine proves to be a war machine to surf music. Its characteristic reverb and responsiveness are great assets for amateur Ventures, Dick Dale or Surfaris.

Indeed, despite the name "Elk Twin Amp" circuit, it is indeed an attempt to clone the famous Fender Tremolux of and should admit, this is it! For 10% of the price of a real Tremolux, this amp Elk done more than its American singer. It has an amp original hand, crossing dominant genes Tremolux and SuperReverb. Heavy!

The sound quality of this Japanese combo is really baffling.

Looking for an amp Fender typed time, I stumbled upon a great opportunity. The affordable vintage U.S. are not always in decent condition. The amp Elk was like new, restored, revised by a (real) professional Retube with good lighting. For 350 euros, I do not see any current or even vintage amp can compete with him in the field of instrumental rock, a real favorite area of ​​the Elk Guitar Man. However, the channel "normal" also marks a certain versatility, certainly relative compared to other newer devices, but not negligible. After fairly tried, I must admit that the diffusion of clean sound is excellent but missed by some high mids and treble too will others. The specificity of the used guitar will be retained. It also seems to accept the vintage guitars (Klira Lady 65 'Ibanez Goldentone 64' Jaguar 63 ') that scratch latest yet typed (Di Pinto Mach IV, Gretsch G5191BK), with a clear preference for the semi- Cash and thinline!

If you were to fall on a Elk, do not hesitate too!

For the curious, I recommend you listen to her sing! Link, the same amp (same circuit and speakers) in head + cabinet: