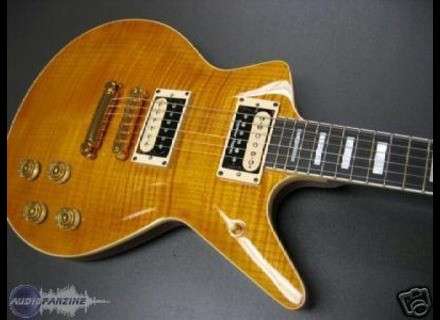 Cadillac Custom Select, Other Shape Guitar from Dean Guitars in the Cadillac series.

rossz's review (This content has been automatically translated from French)

Dean Guitars Cadillac Custom Select
5
So the Dean, no longer manufactures, assembles silent hand in the factory Dean of Czech Republic. MODELS These have 22 boxes, a tuning fork type Gibson (24 "3 / 4), an easel-style tune-o-matic, and two humbuckers, with CONTRL typical Les Paul, namely volume and Tone for each microphone. The shape, for my part I love is a mix between a Les Paul (still it) and an Explorer: see the image. Two ranges of finishes are available: the "Ultima" I poss of, with Dean zebra pickups, chrome hardware one, and Premium, with Seymour (I know what MODEL, I think it&#39;s two Pearly Gates) and the zebra still a hardware dor (the I do not like also). dernire It is this finish which is also in the picture, but in both cases, there is a mahogany body 2 pices, a Mahogany neck, and a table relates Saddle flame. It&#39;s not a blade of Saddle adds, but a nice pice of two prs centimtres at the highest the table, this dernire bomb as the Les Paul, yet it. The key is on it ... bne, if sir, the true.
What else? Repre key rectangle real pearl, a nut in plastoc a little rotten, the oil bath Schaller mcaniques if I&#39;m not mistaken, and the famous V-head Oh, and a short white binding all over the body, neck and head. On mine, it just bav there is a Czech glue on the box 17 or 18th, and the nut is so so, but hey I can not gnraliser. I put 8 of the coup, given the quality-price ratio, we&#39;ll talk about the end

Then use it throughout the rev property: the coating of the handle is soft and profile, feed but not as big as a Les Paul, can play well regardless of the position of hand. Especially since I remember, it is not an equivalent prs "wide fat" in the PRS. Access in acute form requires Explorer is nickel, and all the knobs and switches are accessible.
The weak point is the strap that attaches the handle is located derrire when it should be won on the "horn" suprieure. I&#39;ll make the change soon, but in the meantime, given the size of the head and body shape, the guitar looks a little head ct, and a little ct table. Once the belt clip on the top, I think she does look a little more up the sleeve, which is a little teacher, but with a proper strap (which is of course = l &#39;shoulder), it should go. 7 for AC, because it can be a bit boring live, and even in gnral.

Level style, I play in the rock / mtal, plus a bit of everything from time to time, and I use my clean sounds regularly. Microphones standards are correct and PCHS, each providing properly. Intrmdiaire position combining the two pickups and least INTERESTED, but hey, I do not use any fawn. I also chang the bridge pickup with a Seymour Duncan SH4 (see my opinion on the beast in question): the microphone is very well on this type of guitar harmonics out trs good, sound balanced and I like it (I play on a Dual Rectifier) ​​in both clear that saturax.
Obviously, there is no split of the microphones, so too bad ... I can be installed in an SH2 neck, but for now it suits me well trs. I rgler made by a luthier (Franck Bolaers Lille) because it bordered as two since I was not pulling and chang j&#39;tais Drop in pass D: since g nial, no frisette the top. Like what, it&#39;s worth sometimes snap shot 45 euros for a rglage

I have two other electric, including a PRS that I have for a year, and this is the dernire small, with only four months. Nevertheless, it is with her that I play most right now, because it has a nice feeling, and then I like it. It is clear that it is not worth the PRS, but has a look that kills (too bad that the flames Saddle is unclear in translucent black ...) of good wood, good sound, in short, trs a good guitar, with a high quality manufacturing trs. So this is my favorite deuxime, PRS APRS, but heel prs.
All this price you say? You are right. Franck Bolaers, when I told him the possible question, said that without some minimal manufacturing default, made by a luthier it would cost between 10,000 and 12,000 FF (1500-1800 euro). I paid, including postage, new 500 euros (MODEL last remaining, with a premium).
In other words, it&#39;s a steal, and I&#39;m hyper as the Dean no longer manufactured in the Czech Republic but in addition to the US Core, and it is no longer available MODEL with this type of finish. Especially since the US are flat top, and often three humbuckers instead of two ... Obviously and are expensive

If you are lucky like me to find a gem like that, online, shop, sale or other dpt, go for it! One thing is for sre, I keep mine as long as I have no other Cadillac, and it does not go below 1000 euros! To confirm my opinion, go see the Dean US forum, they say that many of the European Dean, sometimes done better than some US ...
Did you find this review helpful?yesno
»

Other Dean Guitars other Shape Guitars