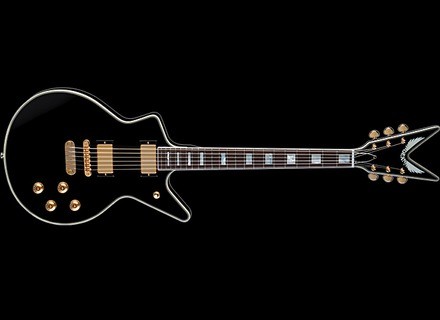 Cadillac 1980, Other Shape Guitar from Dean Guitars in the Cadillac series.

Dean Guitars Cadillac 1980
5
Made in Korea but do not panic, it is well made. The model I have is the one with 3 pickups (the photo is the one I bought and cleaned). The look is really killer and we don't see them often in France. The pickups are Dean with cover, they are not bad but they don't do all kinds of styles... 3-positions selector and 4 knobs, 2 tones and 2 volumes, Grover tuners. The guitar is well finished, the finish is great, the frets are perfect, the neck is straight and it stays in tune. The top notch of Korea!

The neck is very nice, quite thin, easy to play. The head of the guitar drowns a bit due to its size. It's flatter than a Les Paul but it's pretty heavy, a guarantee of quality in my opinion.
About the sound, it is very efficient on&nbsp;distorsions&nbsp;(it's a Dean), the sound is pretty loaded in mids and I love that.

It is perfect for my style of music. Good sustain, I play on a night train with a Vox distortion SD2 boss over the top and a Vox. Sounds really fat. On a clean setting it's good but lacks a bit of personality, which may be a pro or a con, because you can do whatever you want with appropriate effects.
I am repeating myself, but the distortion is really great; accurate and "fat".

I used it for 1 year and I am pleased with it. I bought it cheap in mint condition but not wired. That was a guitar that I really wanted but I did not find it in France. My luthier (Maurice Dupont in Cognac) himself was surprised by the building quality. Finding a hardcase for Dean Cady is hard and expensive because it is not distributed in Europe (not yet found anyway). I tried many styles of guitars (Fender U.S., Gretsch, Gibson SG and LP) and that guitar is the same quality. What does it have more ?...THE LOOK DUDE ! Everyone remarks it directly, black, gold hardware and 3 humbuckers, one thing to say : Thank you Dean.

Other Dean Guitars other Shape Guitars