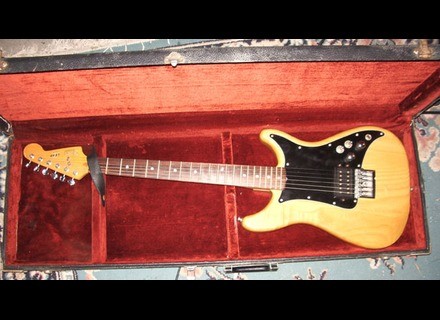 Lead I, Other Shape Guitar from Fender.

Fender Lead I
4
- Made in USA at the end of period CBS in 1981.
- Bridge: Fixed kind Telecaster deluxe string through.
- Body: I ​​do not know. The memory peeling paint and bleached place as on most of the time Fender.
- Neck: Maple with rosewood fingerboard 21 frets (it was an option) to profile C. Access to the rod adjustment is made to the former: it is necessary to remove the handle. Fortunately, the handle is very stable.
- Micro: Humbucker designed by Seth Lover in the bridge position, impedance 13 Kohm.
- Settings: Volume and tone and two switches: one winding (winding handle / humbucker / coil bridge) and a combination of coils (serial / parallel).

- The handle is very nice, nothing to do with that of 1979 Stratocaster V proéminant.
- The body is smaller than that of a Stratocaster. It has a little something that a Les Paul Junior DC. The weight is light (this is apparently varies according to the year of the Lead).

Contrary to what one might expect seeing this black guitar with a single humbucker in the bridge position and considering it was built in 1980, this is not a metal oriented instrument. The switches can have a good range of sounds locators with their own personality somewhere between the Stratocaster and Telecaster. Even choissant the two coils in series, the sound is typically fenderienne. Note however that the switch from single to double coil induces a difference in level of significant output (the volume knob is your friend).

The effects go well. It will still be careful about the choice of overdrive because the high level of output when it is humbucker can make it tricky to obtain a slight crunch (at least that is my experience with a DOD 250).

She is doing as well as clear as distorted sounds. In practice, the lack of neck pickup is not dramatic (at vesoin, the body already has the necessary trapping in adding a single in the neck position) because the change of winding is very audible. We can consider the most directories associated with Fender. The humbucker has a very good record in slide and may even consider playing jazz tone knob (and depending on the setting of the height of the microphone).

I use it for about 6 months. I rather go for an Esquire or a Les Paul Junior when I discovered it. I had previously never heard of this model. This is my first solid body having been in the past a Danelectro and a Guild Starfire (most of the time I play acoustic and Fender and Gibson borrowed from a friend if needed). This is not a common instrument, but it proves very endearing to the use and presence of multiple settings on a single micro breaks the limitations but must adhere to the concept.

I studied a time adding a neck pickup but the complexity of the wiring still holding me and sounds already available eventually suit me but I have not said my last word.

zexxsp's review (This content has been automatically translated from French)" A fantastic guitar!"

Fender Lead I
5
Everything has been said!

A little heavy on show ... his only complaint!

I have 2 years, and I prefer it to my American Strat!

Fender Lead I
5
A guitar is easy to use competition to the Gibson Melody Maker. No vibrato, great humbucker Fender with simple settings that I like, a volume a tone and a phase reverse switch. Handle as the only Fender knows them. This guitar made in United States is a masterpiece of simplicity and quality.

A body a little more than a menu Stratocaster, this guitar is even more handy. The handle is 630 mm with 21 frets. It is round, is ideal to play non-academic, but the academic game is played so easily. Ergonomics is one such model. The sound palette is not expandable, but playing with the phase switch and tone of many styles can be played.

As you can play jazz and hard on this guitar amp VOX English style is perfect, you can play without being fat and get rough, always with the phase inverter sounds close to an acoustic guitar.

I use this guitar since the early 80s, was the guitar of Martin Moon. I got rid of at the time a Fender Mustang which had too many defects to buy Lead which offered a professional quality for a ridiculous price. Many technical innovations, like this fabulous humbucker. I found the instrument so good that I bought the following years the other models in the range, 2 and 3, for even more sonic possibilities. Today these models are no longer manufactured, they are also collectors of guitars that can compete with all the current productions, except for the excited vibrato that will not find happiness. All other guitarists may find an advantage with such a guitar in their range, not too expensive, a real pro that you can take it anywhere either.

suilired091's review (This content has been automatically translated from French)

Fender Lead I
5
Fender USA, 21 frets, a double bridge, not vibrato.Le handle resembles that of my 52 tele vintage.Je is 10 because I judge a guitar as a whole and for me it lacks nothing (no I do not work Fender ...)

Ben then c is the Fender ... The shredders, forget it. A little heavy but I am very tough so no problems. Anecdote: I have the since its release, I have never made the handle and settle it as fair as my other guitars (among other things, including a 4 Vigier passion and a arpege for insiders ...)

I haven t styles except priviliges can be blues, blues-rock, rock and even hard rock ... the uses and I (among others) for about 30 ans.Fender super 210, Carvin xv112e, rack: Engl 570 preamp amp Vht 2-50-2. By clean is very good but with a single humbucker in the bridge against a stratum or a tele it will be less versatile. Crunch and the (far beyond) it is absolutely amazing, limitless and I weigh my words. -1 For the clean (which is still more that exploitable)

It is difficult for me to be objectif.Elle was my first real guitar and do my best never quitte.Elle has nothing to do with the modern high rise but it has the s sound is forged, and that I have forged, through time. Repeat this choice? I'm looking for the Lead 2 and 3, ca ... you will answer as