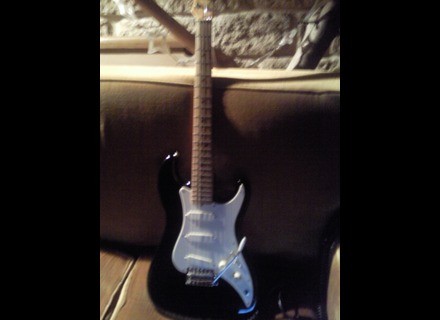 Fender Bullet Standard (1981)
4
Made in USA. Settings quite basic and it is just fine. Telecaster handle type, less thick.

Round super nice, very well when you have small hands! Guitar well balanced, neither too light nor too heavy.

Sound rather subdued, jazzy, almost. In his clear, it is soft and fairly accurate but Fender does not support too large distortion, not enough for my taste anyway, it can get a bit messy in some cases. Little sustain. I'm currently using a Fender Performer 1000 (transistors) + preamp tube to bring a little heat and crunch. A Twin Reverb is better but more expensive!

Bought by chance in 92, I'm tired, I love her sleeve against her by sounding a bit frustrates me sometimes I want more flashy, more like a Telecaster. I therefore considering a change of neck pickup but I do not know what lead me on ... Your advice will be welcome!

cabycab's review (This content has been automatically translated from French)

Fender Bullet Standard (1981)
5
Super guitar this model, I own a white ivory n United States of Series E 102406 and I installed an EMG DG20 micro kit (300 €) to know that, and it has great sound and good comfort on the handle, unfortunately I plan to sell it by need to put my dough in Bécanne state, if there are fans, make proposals

It must be heard to be believed

Ten years and it gives me the balls if I separated

Both have handles sries Telecaster.
START never form t matter in France. The importer of the era Gaffarel was afraid to compete because the quality of START Bullet 3 pickups is absolutely breathtaking. Ms. its body so lgrement smaller more manageable, no vibrato is no problem keeping the agreement, even as the bridge strats for guitar with strings through body .

The handle on it is exactly the same as a Tlcaster the era, a little thinner than that of a START, a rgal.
Collection SERIES silent intended to replace the Mustang. The guitars are therefore sound quality SERIES Mustang, without having the default.
The default of both MUSTANG SERIES, the poor performance of the agreement due to vibrato and fantaisite errors SETTING THE sound due to incorrect positioning of the switch rglage microphones, placed at above each microphone, it happened during the game to cut a microphone inadvertently by a flick of the wrist.
BULLET design of ultra simple controls makes it a real guitar scne.

The handle of the Bullet is heaven on earth, like the era TELECASTER elsewhere. End, with frets mdium, he forgives some imprcis placement and allows the bars clean. Personally I have nothing Bullet shaped Access in START as acute as those better-shaped TELE.
Silent guitar sold cheaper than START or TELE, not because the quality of commodity t change, but only on the design raliss SAVINGS.
The bodies have no dcoupe rear, they are straight. Lgrement smaller than MODELS The series that inspired it is lighter, this is a benefit of scne.
The sound as it is exactly the same as or STRATOCASTER TELECASTER = SUBLIME for guitar with strings through body. For the one with the tailpiece mtallique an extension of the plate pickguard is a bit less because there is a lack of empty sustain these dernires guitars, not suitable for me and for APRS beautiful accompaniments, reels David Knopfler on Once upon a time in the West, for example.

Having a guitar with three strings micro through the handle of 1983 (among others) it is perfect for everything. Except Satriani. But I can not play like Satriani, so I do not have a problem of. For me to play against the Maiden, Led Zep and the Wes Montgomery also has great sounds all the time.
Can not have a bad sound with this guitar.

For over 20 years that I played on DIFFERENT MODELS BULLET, APRS to me is the best qualitprix range FENDER. It is a collector because it is no longer manufactured as originally conceived in the U.S. for a long time. I have several and when its necessary to use a Fender Bullet is the I use.
I advise those who find a not too CHRE, preferences to a professional who can guarantee (For Fender it is easy to tinker with guitars) of the purchase is an investment .