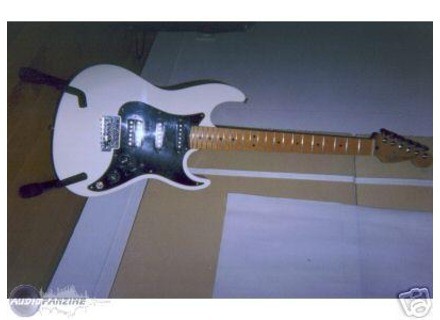 Prodigy, Other Shape Guitar from Fender.

Fender Prodigy
4
After looking around for a suitable Strat-style guitar to play in my country/southern rock/party band, I bought this one from my lead player for $200. I'm not sure where he came up with it, but except for a small piece of pickguard chipped off next to the output jack it was in excellent shape and seemed to be everything I was looking for.

The neck of this Prodigy is sort of the classic "C" shape: not too big, but just enough to fill my hand. The shape is reminiscent of my old SRV signature model Strat. The maple fingerboard feels like the flatter-than-vintage 12" radius and is very comfortable to play.

The body is narrower and the cutaways are sharper than the traditional Strat-style, but all the familiar contours are there.

The controls are all in their traditional places, except for the rear tone control which is replaced by the output jack. This does away with the Strat's angle-mounted jack, which eliminates the extra hole in the top.

The pickup configuration of two single coils and one humbucker was just what I was looking for. I can play an entire show without having to change guitars.

There is not much to dislike about this guitar, but there are a few snags.

Though I have owned and enjoyed other Fenders with a maple neck, I prefer the warmer tone and the feel of a rosewood fingerboard. The finish on the maple necks seems to be a bit thick, and I find it to be more difficult to bend strings and slide up and down the neck on maple. Also, after playing a while a maple neck seems to get a little slippery.

The factory pickups on the Prodigy are not exactly top shelf. The single coils in the neck and middle positions give the traditional Strat cluck and jangle, but are not hot enough for my tastes. The humbucker at the bridge sounds a little muddy, and is also not quite hot enough.

The Floyd Rose locking tremolo is not one of my favorites. Retuning in the middle of a set is out of the question, but the fine tuners help a little.

Why Fender decided to mount the output jack in the pickguard is a mystery to me. This, in my considered opinion, was not a wise design decision.

The fit and finish of this Prodigy, like every other Fender I have owned in the past 20-plus years, is flawless. Nuff said.

I would, and probably will, make a few changes. First, the output jack needs to be relocated, probably to the lower bout (like a Les Paul). Next, the pickups will be replaced with aftermarket units, probably a pair of Fender Texas Specials and maybe a Seymour Duncan Pearly Gates.

I would prefer to have a Wilkinson tremolo on this guitar, but the routing for the Floyd Rose precludes that option.

That said, the Fender Prodigy is a well made, versatile guitar that does almost everything I need it to do. I would recommend it to anyone looking for a "workhorse" who doesn't mind a little compromise.

Fender Prodigy
5
I bought my Fender Prodigy new at Modern Music in Lisle, IL [suburb west of chicago] for around $300 - I don't quite remember as it was ten years ago this month. Well, April being the guitar month, the Prodigy was reasonably priced I thought. So, not knowing any better I took one look at the "Made in U.S.A." print on the headstock, and based on its looks I bought it.

My Prodigy was the only one in the store, and it was gorgeous. The body style was distinguishable from a Strat as it's lines weren't as soft. Beautiful metallic blue finish with black pickguard and black pickups configured with a humbucker at the bridge with two single coils at mid and neck position. 5 way selector switch gave it versatility. This guitar was made for punk, alternative rock, country or blues.
It's got a great raunchy overdrive and a good clean sound.
As for cosmetics, nice chrome hardware, the maple neck/rosewood fretboard felt comfortable and its three-ply black/white/black pickguard is a nice touch. The tuners are stable, simply awesome.


As fun as the guitar is to play, it does have its problems. The whammy bar is placed badly to where it will get in the way of your playing. It rests between the volume and tone knobs when it hangs, so I don't even use it. I leave mine off.
The front-located input jack goes straight in instead of at an angle, and it can cause forseeable problems - one clumsy incident and you'll know what I'm talking about. Too easy to trip over the cables the way it plugs in. The most common problems I've had with it over the years are that the selector switch needs constant maintenance. It doesn't take a lot of dirt getting in to cause volume dropouts, so keep a can of WD-40 handy.

While the body was made in Mexico, it's still very sturdy, very well made. The neck and electronics are U.S.A. though, so as far as a hybrid goes, the guitar will last you.

It's a shame that federal regulations shut down this line of guitars before its potential was realized, before the Prodigy line was given a chance to improve. Modern applications to a classic design were the Prodigy's strongest points. It's a highly versatile guitar, and still a favorite choice among all the guitars I own.

This guitar has a humbucker at the bridge and two single coil pickups. It has a Kahler spider double locking tremelo. Action is great on this guitar. It plays like a dream! It has great versatility in sounds. I can growl some Metallica sounds or coerx some sweet blues out of it. This is my favorite guitar to play. I've had other Fenders, Ibanez (including a mid 70's Santana model)and a Gibson nighthawk (I kind of miss this one). Still this unit is the most fun to play of any of those listed.

The only downside is that I wish it had a little more sustain. Other than that this guitar rocks!.....

This is a great guitar for anyone wanting a very versatile rock guitar!

See all 15 photos of Fender Prodigy »