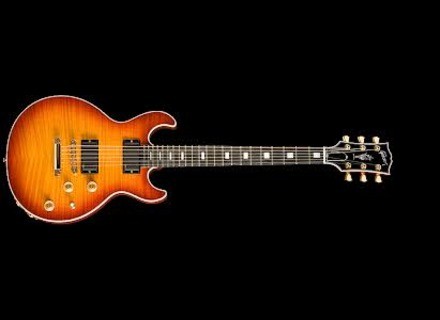 Gibson [Guitar of the Month - November 2008] Longhorn Double Cut - Heritage Cherry Sunburst
4
The Gibson Longhorn was a part of Gibson's guitar of the week series in 2008. The Long horn is a double cut away, non carved top guitar featuring a highly figured flame maple top. The guitar features a mahogany body and neck, ebony fingerboard, EMG 85 active humbucking pickups, an L.R. Baggs piezo pickup with a separate input, gold hardware, and a beautiful flowerpot inlay on the headstock.

The piezo system is a very unique feature to this guitar. The separate inputs allow routing to separate amplification sources for the acoustic and electric sounds. The three kob configuration is limiting as you must share a single volume and tone knob between both pickups. The Longhorn's tuning stability was sufficient but not quite up to par with other Gibson guitars I tested in the price point. The ebony fretboard felt very comfortable but the neck profile was a bit on the slim side-- making transitioning from this to my second guitar, a Les Paul, awkward.

I played the Longhorn through a Mesa Boogie Triple Rectifier. Mesa 4x12 cab. No pedals.

The guitar's action is very quick, this paired with the slim feel of the neck makes it easily one of the fastest feeling guitars I've played. The EMG's have a very distinct sound to them that may be a little hard to adjust to if you are accustomed to playing passive humbuckers. The guitar feels very much at home playing high gain music. The flat body steals a little bit of the low end that you would hear in a carved top Gibson, but it's sound is uniquely pleasant nonetheless.

The Longhorn is no longer in production but you can find them on the used market for around $1300. The limited numbers and unique features make the longhorn a much desired guitar and justifies its price. The Longhorn's aesthetics alone are some of the best you'll find on a guitar at this price point. If you are looking for something different you will be at home with the guitar but be wary that it's unique playing feel and tone may make it less than ideal as a backup guitar in a live setting.