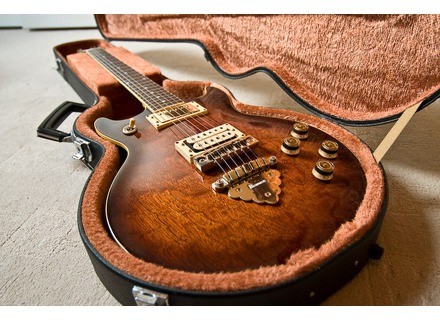 AR105, Other Shape Guitar from Ibanez in the Artist series.

All user reviews for the Ibanez AR105

Yobxx's review (This content has been automatically translated from French)" Very endearing ..."

The pickups are Super 58, Alnico III (which also distinguishes this model from AR100AV). Microphones found on a lot of Ibanez models "vintage" jazz or blues-rock (Series AS, AM, AR particular - which a lot of high-end models). The grain is rather Gibsonian but with a more dynamic "appeased." The overall sound is warm and velvety, with good definition. In the bridge position, it may miss a few potatoes, but it is not without bite: no problem to hook a good crunch and a good distortion. But some may find it a little wiser ...

The icing on the cake: the pickups are and split (push-push on the two tones), which enriches the sonic palette of this guitar accents by allowing lighter than the configuration of two humbuckers (without however reaching the dynamic characteristics of real microphones single coils).

The violin is very correct and the table is beautiful.

So on the characteristics, a score of 8 (Very good).

The handle is very nice, rather late but still present in the hand. the game is pretty easy, both in agreement that note by note.

The guitar is pretty heavy, like a Les Paul which it is based by design (body and mahogany neck).

Access to acute is easy: the heel of the neck is well shaped and large size (due to the thickness of the body) does not affect the ease of play in the treble.

The only fault I find with this guitar is its balance: standing, she leans on the side of the head. You get used to after a few minutes of play but it makes the game more tiring over time. Too bad.

The rest is so successful that I still put a score of 7 (Good).

The sound is nickel: warm with a good definition. This guitar is very comfortable to provide sound jazz, blues, rock, hard rock, ... As a Les Paul, it can accommodate many styles of games and music. The sound clearly remember the dune Les Paul, in a little more light, but it is not a erzatz: the grain is different. The Super 58 pickups are for something: I also have an Ibanez AM50 (a kind of mini semi-hollow version of the AR series - very successful this way), itself equipped with the Super 58 pickups and have a true personality .

Splitted the microphones deliver beautiful sound and are more flattering on rhythmic funk by examples. Can be found that it lacks a bit of momentum, compared to real simple.

However, the possibility to split each of the microphones independently can really fine-tune the sound, thicken or make it lighter.

A highlight of this guitar is its sustain. It is heavy but it will be fully satisfied when we see how she holds the note! Capable of delivering beautiful harmonics or to go to feedback.

The electronics seem Quality: The knobs are relatively effective in all of their race, the push-push function properly (despite the age of the instrument).

Plugged into a Carvin Nomad combo all-tube, or a prémp Mesa Boogie V-Twin, or a preamp SS11 AMT is a treat, both in clear, that crunch or saturated!

I use this guitar for almost a year.

As such, I tried the Gibson Les Paul and I have owned a Hagstrom Super Swede. The Ibanez is distinguished by a grain of its own.

I use rock, blues-rock, groove, jazz, and in these records the Ibanez AR105 satisfies me.

This is a beautiful instrument, fun to play and which delivers beautiful sound.

I bought it because I have a weakness for Japanese guitars from the late 70's early 80's and once again I was not disappointed: a vintage quality instrument at an affordable price.