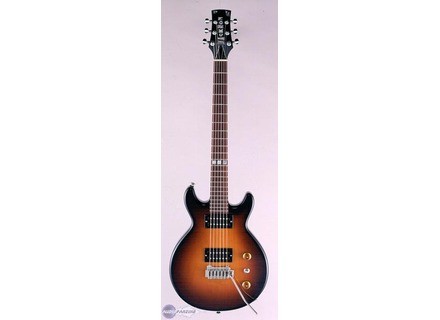 Jackson JJ1W Scott Ian
4
For those who ever wanted to have a bridge to divebomb on their JJ series guitar, this is the one you're looking for. The guitar's main difference is that this has a Wilkinson installed on it -- hence the W designation in the name. The guitar features a mahogany body with a maple neck, a rosewood fretboard with 22 frets, special inlay, a Wilkinson bridge, two humbuckers, one volume, one tone and a three way switch.

The first thing I noticed about this guitar is that it's pretty heavy compared to some of the other ones. If you're more into the lighter guitars, you might want to play a few of these and choose accordingly. The best part about this guitar is the Wilkinson that was added to it. To me, this makes all of the difference in the world. Not only can I do those killer Anthrax riffs with this guitar, but I can also do my lead lines I normally do which involves the tremolo. The guitar had locking tuners installed on it as well, which I'm fairly sure were an aftermarket thing. The nut was cut nicely on this, and it only had some light fretwear overall. Really solid for what you're getting but just slightly heavy.

This guitar actually had EMGs swapped into it. It had two EMG 89s installed with a push/pull on the volume knob to split between the two different tones. This really made the guitar super versatile. In the humbucking mode, you had a real thick sounding, aggressive rhythm sound. For leads, this was awesome, and it wasn't too bad for rhythms, either. I usually prefer the 81 in the bridge, but the 89 is pretty cool as well. It's not quite as thick as the 85, but it's close. In single coil mode, you could get the really nice clean tones, and it also allowed you to get some cool funky tones as well. The pickups can sometimes sound a touch sterile, but that's just the way EMGs are.

This is my favorite JJ model since it has the Wilkinson bridge. I'm in love with Wilkinsons, and they're second only to my love for floyd roses. If you can find one of these, I recommend picking it up as they're very solid guitars, and they can be quite a bit more versatile than you might think.
Did you find this review helpful?yesno
»