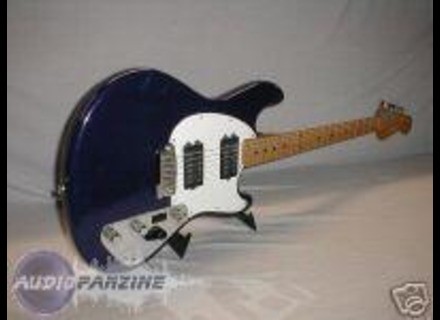 Music Man Stingray 2
5
I got this bass from Guitar Crazy, which is in Sydney, Australia. I bought it because i was told that it was one of the greatest basses my friend had ever played, so I figured I should try it, and he wasn't wrong! In Australia, you should pay anywhere in between $3000 - $3500 for a Stingray.

Everything. This bass has killer tone. Through my amp, which is an Ampeg, I have never heard such beauty. It has a more middy sound than anything else, but it can be pushed to either side of the scale really well. The action is so amazingly low! This thing is probably the easiest bass in the world to play, and combined with it's awesome, raspy tone, it's no less than perfect says I. It's also probably one of the best slap basses in the world too. You can do anything on this. Tapping ain't a problem.

The only thing that i didn't when i first bought was that the strings were a bit worn. But thats because people were always walking through the shop, picking it up and having a go. And rightly so I say. BUt the strings were easily changed, just negotiate a free pair of strings with the store guy. After paying a cool $A3250, i'm sure a free set of strings shouldn't be too hard to come by.

It's a very simple bass. Which is useful when you don't have time to fiddle around with set-up. It has a 3-way EQ, with optional piezo, which can actually make quite a bit of difference to tone. It has a Maple neck, with a matching headstock. It comes in a huge range of colours for the body, as well as the pick guard.

Two words. Utterly Awesome. If anything ever deserved a five out of five (and there are plenty of them here) it's the MusicMan Stingray. Bloody incredible tone, easiest thing to play in the world, it doesn't get much better than this people. If you've got some money burning a hole in your pocket, take a trip down to your local music store and try one of the out. It's worth it.

Music Man Stingray 2
5
i bough this bass becuase ive been looking for a good bass. bought it new jersey bass and guitar . i paid 1275 . its sunburst.

i love the neck and how it plays so easily.you can get all types of sounds out of it.play one and youll know......its beatifull too.

buy one ,,,,beats the warwick corvette proline i was into. but thats my opinion.

Music Man Stingray 2
5
I had gone to look the local music stor to look for an additional speaker cab to sit under my existing combo. Having tried it out on a display model of bass close to the Samick I owned I foolishly asked "Do you gain anything extra by buying a more expensive guitar other than the name?". I was offered to try the Musicman and was hooked. After a week of sampling other basses at a number of stores i returned to buy the Musicman. I paid £950.00

The first thing that hit me was the low action which made it so easy to play and secondly the tone. With a three band EQ pre-amp, the variety of tones is more than enough for my requirements.

The only thing I still cannot get used to is the fact that the machine head for the G string is on the opposite side of the head to the other strings.

The Musicman Stingray is a well built bass that is balanced perfectly.

The only bass I have picked up of the shelf and felt comfortable with. Action and balance make it so easy to play.

Papyzen's review (This content has been automatically translated from French)

Music Man Stingray 2
5
Late 60&#39;s, Lo FENDER sold its Socit (manufacturer and the Tlcaster Stratocaster) and the name Fender CBS remaining consultant. At 70, CBS shall decide to make the chain of production and Tl dtriment Start at the quality. Lo FENDER objects and leaves CBS with its best craftsmen. In revenge, CBS gets to court that Lo Fender never be able to use his name to sell his own guitars. Lo FENDER shall decide to launch the MusicMan guitars (brand bought by Ernie Ball 83). Lo FENDER shall decide by raction, to the top of all that he did pr cdemment, the continuity of the Start by correcting its weaknesses and the amliorant again, without looking at the new guitar will be called cot.Cette STINGRAY. This is the "STRATOCASTER" made by FENDER ULTIMATE!
The Stingray has a handle of the Start. The Stingray 2, the handle type Tlcaster.
Fender has been rated, rating, 2 X 2 single coils of the Stratocaster utiliss for Start sounds and sounds like Humbuckers, for fans of Gibson guitars. A prampli active, the first ever held a guitar, powered by 9 volt battery, adding treble and bass instead of cutting them like on other guitars. Of "peoples-pieces" micro (micro dots) much larger for better capture even with vibrations of the strings trs fine. Phase switch on / off and phase HUMBUCKER for sounds like Gibson. Strings through the body and no vibrato, sustain a thundering.
When the "STINGRAY" was released, all opinions were unanimous that does sound PHENOMENAL silent .... but the price the silent too. As a prototype car has not o look at the cost of design and matrial, but that is too expensive to be widely marketed. This is what happened and the "STINGRAY" is out that 8000 copies before disparatre as too expensive! (When he left, with the price, you could buy a Stratocaster, a Gibson more)
It remains a rarity or Exceeds all strato tlcaster, (as was FENDER Lo) and few have had the pleasure to test an extreme. This is the dernire "Stratocaster" t have made a handmade and no notion of economy. The last of the great ralisations Lo FENDER.

A super race of Tlcaster with a varnish that facilitates end the game end or fast. I spend with ease of musical parts that gave me trouble even on my other guitars (Gibson SG, Epiphone Sheraton, Ibanez quarter cash AFS75T, Yamaha Pacifica) is the handle that I prferre! 22 frets and Access in an acute no problem! The sound is wonderful and easy to get: the 4-position switch, one volume knob, a button adding acute mountain streams add a button, +, on two central positions, the ignition switch causing the typical sound well known my SG Gibson.
on the other hand, Fender does not look to the wood (maple) and the guitar is quite heavy, much more than Tlcaster or Yamaha, but not more than my Shraton.

Extreme versatility given the range of sound qualit.Avec double coil "neck", the sound softer or crystalline depending on SETTING THE tonalitcomme stratum). With double coil "bridge", treble the most aggressive and powerful (as in tlcaster). Me, playing mainly Blues, I am filled with the sound record.
I use an amp with Peavey Bandit 112 Transtube who does is certainly not, but when that fills even though his office trs.
I am considering buying a tube amp Fender Hot Rod style, Peavey Classic for another "magnify" the sound.
The sound quality is so much that I never tire of it and forgot to use my prampli modlisation. V Amp Berhinger. (It no longer uses gadgets when you have the chance to ride in a vintage Rolls)

I bought this wonder there is a little over a month to enchres on ebay!
A reputable business because his is not well known by the majority of experts and, therefore, the MODEL is little demand. This is a chance for true lovers!
I love its comfort, sustain its sound, its ease of adjustment, and the myth that REPRESENTATIVES in the history of Fender guitars and electric.
I like less weight heavy enough.
I&#39;m 60 and I play since the age of 14. The electric guitar I had in my long life as a guitarist are in order: a Klyra a Hhner a Rickenbaker, two in the 60&#39;s Stratocasters, a Gibson Les Paul, another Stratocaster 72 and Tlcaster one, and now I have a Gibson SG, an Epiphone Shraton, an Ibanez 1 / 4 box with Bigsby vibrato AFS75T, and a Yamaha Pacifica. I tried a PRS CE24 rcemment who sustain and, with the rotary switch, sounds quite similar those of my "Stingray 2". But of all these guitars, each with their quality, their default, their charm, and I use all take turns, it is the "Stingray" that excites me the most. I RALIS a fourth and remains without any regret.