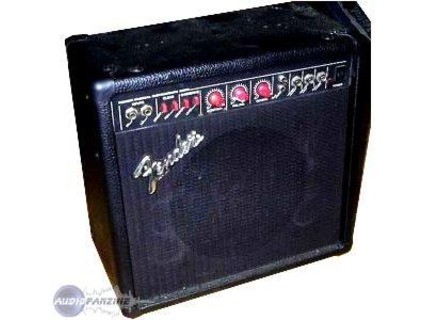 Fender Hot
4
75W transistor amp that comes
It has: - 2 inputs (hi / low)
- 4 presets sound (five if you count the sound without preset) 3 clean, a crunch, a lead.
- 1 volume, an outline and a reverb (yes it's not a big monster either)
- A CD input, output pre amp, pre amp input, Head phone

So simple you die !!!!! You branch, you turn your volume (just the outline, too) and if you no pédaliter multi effects pedals or, you choose the style of his among the four presets ..... And is that after the happiness ... You played and we quickly had a good sound (especially if there are pedals upstream)

Then the sound, talking about: the two clear sound presets are great, one of two highly crystalline and the second is really soft, fluid .... really love the sound clear this amp. For me far ahead of the clean sounds of Marshall and others.
Saturated sounds: good bah there you can feel the difference between a Marshall and a Fender. The preset crunch is pretty cool for all that is "old rock". It is very how to say?? N'ROLL ROCK!!
Lead then there's the attention because it is a big difference in power between the other presets and it (a little too much even for that matter) because if you play on the crunch channel to one-half the power ( already in the process you will be wrong) and you change channels without lowering the volume: c a murder for your ears .... A lead other than that its pretty cool, but will not solve the metalheads .... For cons I could test it with various multi-effects pedals and here and greatly improves the sound ... so prévoyé pedals and you can then play really at all ... (Except the trash)

Well here is a 1 / 2 years that I have and frankly I'm really happy. It works great I've never been a problem ... well a good little baby very reliable.
Otherwise I think this amp here can be the perfect tool for beginners or for those who want to repeat with a batterie.Pour terms of concerts, in my opinion it is necessary to take it back, but only I think.
This is my first amp and frankly it's good to have a 75w under his arm like that ...

MoJoMarco's review (This content has been automatically translated from French)

Well yeah it's a combo, one branch is lit, turn the knobs until that is done.

Well then let the clear, this obscure low-end amp went silent in the beginners of the 90s for scholarships empty thought a big Fender logo was enough to ring the unit to which the silent fix the 4 presets are real shit infmes unworthy of such a manufacturer, there is no one to catch the other and we understand that this ugly duckling did not make an impression, BUT. .. of water has flowed under the bridge since Pigalle (and elsewhere) and with the proliferation of amp simulators raliste more than each other, guitarists wanting to connect directly to a combo count went as it should be as neutral as possible to avoid producing a sound bouguiboulga quite indigestible. And the miracle, the HOT (in the text) 75W resurfaced from oblivion to tnbres in which he would remain for us dtdfinitivement (re) discovering its prampli trs just typ (Obviously without the presets) and HP 12 "which is no shortage of air, with the release Fidler great for any emulator / pramp / pedals of characters. An effects loop, one between (2RCA) directly into the power amp if you want to replace the pre-amp compltement, it suddenly becomes much more s ducing the guy!

In fact, the guy I bought my scratches (there are about ten years) to me over with! The great intrt of this gear is that it does not much cte resale and currently its largest default is to have sold its output does not, it is relatively rare in our latitudes (called "Automatic" United States). Carrment PowerEngine 60 cheaper than it will give you the same rsultats (with even less when EHJV high volume, do not DCON).
Note: Verify the purchase to maintain the connection of 2 inputs jack fool quality ...

serophta's review (This content has been automatically translated from French)

I used to BPS, I found it well with a battery it holds up without problem, unless you have a gross derrire the fts.
I t's channel saturation but with pedals you catch the blow, do not panic ....
That's it simple but a good amp for the damage channels saturates