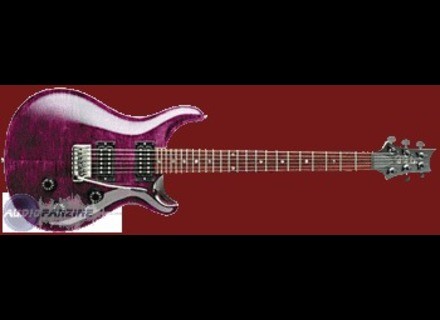 CE24, Other Shape Guitar from PRS.

View all offers for PRS CE24 »


It seems PRS guitars speak for themselves, but here it goes. The range of tones you get are excellent. It is like having a 3-neck guitar with Strat, Tele, and Les Paul pickups on it. Truly a great range of vintage tones on a guitar with some modern features. The tremolo/tuning system is the best non-floyd rose I have played. Stays in tune perfectly through all but the most aggressive tremolo work. It plays like a dream, and looks like one.


A glue-in neck with ebony fingerboard and bird inlays would have been nice, but I'm not complaining.


The shape of this guitar coupled with a flame maple top, and the PRS style unstained maple stip (looks like binding) make it a beatiful, well constructed instrument.


PRS is among the best of the best. When I have the money, I will buy one of their top models.

PRS CE24
5
Paul Reed Smith guitars have a great exotic look but it's very versatile and dynamic town. These guitars are generally very great to look at and have a sensational appeal in there beautifully quilted tops. These guitars feature generally a mahogany wood with a maple top which gives the guitar a very dynamic and versatile tone. They generally are equipped with humbukcer pickups or their own Paul Reed Smith mini humbucker pickups. These guitars are extremely versatile and you can easily find country artists all the way up to modern new metal guitarists play these guitars. There's something about them that has just a great feel and tone for basically every style of music. Not to mention how beautifully constructed and how well-built they are adds to the allure of these instruments.

The tone of these guitars are very similar to Gibson style tone. If you've ever played any mahogany based guitar such as a Gibson Les Paul, Gibson SG, or Explorer guitar that you will find yourself very comfortable with this instrument. The funny thing about these guitars is that they sounds very chiming and clean with clean amplifier setting. I've never found a Gibson guitar give off any type of solid spanky clean tone, but these guitars find some way to balance itself out in the frequency range to give a solid clean tone. It's very remarkable to my ears to hear a guitar that can cover so much ground as these instruments can. It is an easy selling point for these guitars that gives a user such a variety of total features to operate.

These guitars are quite expensive but you can find them 40% of the new value on any type of classifieds or used section online or in some guitar retailers. I suggest getting one of these guitars used because then you allow the person who originally bought it take to hit on the expenses new price. Even though these are quiet expensive they are great guitars and hold most of their value quite well. They sound good when playing a recording session or any type of live gigging setting. Overall these are great versatile instruments that sounds fantastic.

PRS CE24
5
Paul Reed Smith guitars have a great feel and overall are very exotic in their construction. When you pick up a Paul Reed Smith guitar you immediately notice how well-built these instruments really are and how their construction quality is very superb. The tone of these guitars are very similar to a Gibson style voicing. That could be due to the thick mahogany wood that is used throughout their billed process. Generally these guitars will feature the exact same wood compliments and combination as any other Gibson custom or standard Les Paul guitar. So essentially when you get is a mahogany body and a mahogany neck with a rosewood fretboard and generally a flame maple top or a quilted maple top on the. You'll get the standard two humbucker pick ups and sometimes you have a three humbug or pick up and many Paul Reed Smith guitars. But overall you get a very similar voicing as you would a Gibson Les Paul instrument.


If you've ever played a Gibson Les Paul and you're going to be very comfortable with this instrument. So the tone, saturation, and feel is going to be very similar to a Gibson Les Paul guitar. The areas that these guitars really excel in is the high gain amplification setting. But still these guitars sounds very good at clean tones as well. I think that might be one of the selling points on these guitars is their ability to be even more versatile than a Gibson Les Paul guitar in my opinion. I find it to Gibson Les Paul guitars don't really do well in a clean setting but they excel in a hard rock high gain set, whereas the Paul Reed Smith guitars can do it all. I have seen Paul Reed Smith guitars played by country musicians all the way through pop and up to nu metal guitar players. That's a lot of versatility in one type of instrument. For me that is a very high selling point on these guitars and also the ability to reach the higher fretboard because of the cutaway body on these guitars. I find it a lot easier to do soloing and riffing on the higher frets because of the cutaway which makes my playing time much more enjoyable.


These guitars are fairly expensive and can be quite a heavy burden for a budget musician. So I find that these guitars are really tailored towards the person who has been around the block a while and knows exactly what they want and also the person is a professional and has a little bit bigger bank account to afford these type of guitars. Overall these are great sounding instruments and have a great versatility with a solid sound and beautiful look. These guitars are great for recording and they're also fantastic for live stage playing as well.
Did you find this review helpful?yesno
»

PRS CE24
4
Recently PRS CE24 has been making cheaper guitars and trying to change their image from a guitar maker who only makes guitars for rich dentists to a guitar maker who makes guitars for everyone. Along with making more reasonably priced guitars they have also been making signature models for people younger players would recognize. One of those players who got a signature model was Nick Catanese. Nick Catanese is the other guitar player in Black Label Society opposite of Zakk Wylde who himself is no stranger to unnecessary endorsements.


To my knowledge Nick Catanese did not play a PRS model before they made a signature model for them. I always remember seeing him with Les Pauls. The guitar is PRS's single cut shape but with a slightly thicker body. The body is all mahogany and has the classic EMG setup with an 81 in the bridge and an 85 in the neck. It has a Tone pros wrap around bridge. It has a 22 fret ebony fretboard with red binding. The body of the guitar is bound in red and the pickup rings are also red. On the body of the guitar is a huge Nick Cantonese logo which I had never seen before.

Playability wise this guitar plays as good as any PRS guitar. It has PRS's wide-thin neck profile which feels a lot like a 60s Gibson profile. The Tone pros wrap around bridge is a great setup and matches well with the 25 inch scale. PRS guitars always seem to have better intonation than other guitars even with their seemingly simple bridge setups. The set neck joint is nice and slim so you can play all the way up on the neck.


This guitar could have been a lot better. If they kept the design simpler. They are losing a lot of potential customers with the huge crazy logo and the red binding. If it just had white or grey binding I think it would be really cool. And if it had to have the crazy logo on it why not make it removable or something or a finish option. Many guitar companies have them problem when it comes to signature guitars. Instead of just making a good guitar similar to what the guitarist uses they end up making 6 string billboards for that player and normal people dont want to play them live or anything because they have someone else s name plastered all over them.

Did you find this review helpful?yesno
»
Read the 26 user reviews on the PRS CE24 »