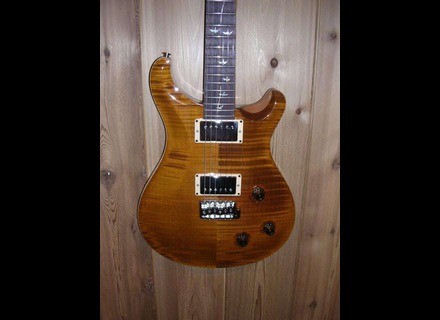 Joseph_Merrick's review (This content has been automatically translated from French)

Full PRS ... excellent quality, setting the vibrato is unique to PRS, the mechanics are special too, I noticed a very good performance of the agreement.
Guitar at a particular smell, probably the product used for cleaning product ... ... PRS
Ah, the ropes are also PRS, and the sound is such that I will put that PRS in the future I think.
Mine at the threads on the handle and more birds. Some 20th birthday, as do birds (second half of the series I think).

The handle is very nice, it is round, hand wraps around it, so good osmosis.
I compared with just before the musicman petrucci, whose handle is thinner and speed that I knew. PRS is the neck on a different perspective, just as attractive, but it's different. To see what is research.

No problem for access to acute ...
The guitar is relatively heavy, almost as good as gibson.
Ergonomics are good, the only "defect" is the micro switch: there is none, it's a knob, the same as for the tone and volume. A member of Audiofanzine has been replaced by a switch, what I find interesting.
Since you can play the full humbucker, or splitter, it makes a lot of positions, so the knob is not the most readable.
However, I am not disturbed at the point of wanting to change for now ...

I played on a Marshall JTM 60, I tested it on a Mesa Boogie F30, a Soldano rectoverb changed, a Mesa Boogie Rectifier I think, and a crate ...

I preferred the Soldano.

The sound and expressiveness are wonderful ... not even plug the guitar! I play 70% of the time to practice my unplugged, no need for amplification. I think even register to my compositions, the dry sound of the guitar so it surprises me. It vibrates, it's powerful and balanced.
When the branch, it takes life and sings ca.

I compared it to a special gibson (voodoo I think) ca drooled all over the place was fat, I had my way. I tested the musicman petrucci, it was very concentrated, and chased the end ... but it lacked soul, then I plugged in the PRS ... and she spoke and sang, and it was much more versatile.
The choice of mic positions to find just what you want to sound clear and saturated.
It was a bit of Gibson, some of the fender, but it's another, and another vibration.

Before the final purchase, I compared to another gibson, the highest I think. Special model, even more than the PRS. I was afraid that my 22 custom is dethroned ... nay!
The Gibson's had his big slobbery and "fat" and too talkative ... (That's what I heard, this is only me ...) as soon as I plugged in behind the PRS, I heard a soul re speaking, more delicate, and yet his very rock.

I tried 2 prs of the same model store, one sounded better than the other. Remember to compare, even if it is more expensive than ordering online, this range of instrument, it is essential to test and pay more to be able to compare.

I have a few months, I play a lot unamplified ...
A test on a Mesa Boogie and Soldano, she began to roar in the true sense.
I tested the music man gibson and before taking ...
I paid quite expensive, but it is the price for the one you really want (tested in-store, not the blind controlled).
Of course I do it again this election, I have not tested better ... and mine seems "alive".