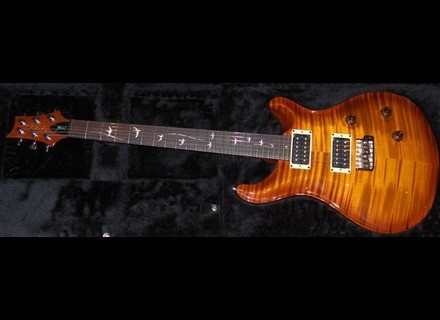 10/10
The handle is ideal my taste, not too thin not fat either. The access to AIHUS is easy.
The sound !! I wondered if the reputation was the height of reality ... in the clear: a purity not yet seen many guitars trying, a handle that reference superb harmonics ( Satriani midnight ringing !!)

10/10
perfect in what I like, I can understand that forbid not everyone else we all play on the same scratch but frankly it is stunning.

I play a Fender 65R allows me to rhausser the purity of the PRS.

Giving classes, I t amen play lots of models DIFFERENT, including large models, but I always found something was wrong: bold but not fine, fine but no power, too heavy ...

l I fell in love, and in addition it is beautiful, finished as a work of art ... Perfection does not exist but ... no default transmit (the knob is destabilizing 5 positions the first 5 minutes, then why not this quickly changing the rglage into a rhythm so I effreine appreciates too)
Did you find this review helpful?yesno
»

PRS 20th Anniversary Custom 24
10/10, very beautiful, perfect finish and yet not new .... made in USA, 24 frets, 20th anniversary birds (birds in flight), PRS tremolo, vintage pickups in the bridge, HFS in the neck.

10/10
The neck is perfect for my taste, not too thin not fat either. Access to AIHUS is easy.
The sound! I wondered if the reputation was up to reality ... in its clear purity never reported yet tried many guitars, which returns a handle harmonics superb (midnight Satriani that sounds too easy)

10/10
the perfect, in that I like, I can understand that it may not be to everyone if we all play on the same guitar, but frankly it's stunning.

I play a Fender 65R allows me to enhance the purity of the PRS.

Giving lessons, I was led to play a lot of different models, including large models, but I always found something that was not: bold but not fine, fine but no power, too heavy ...

there I fell in love and she is more beautiful, finished as a work of art ... Perfection does not exist ... but there not fault convey (the 5-position knob is destabilizing the first 5 minutes and then why not, it avoids changing the setting in effreinée rhythm so I appreciate too)

clem@met1's review (This content has been automatically translated from French)

PRS 20th Anniversary Custom 24
5
First of all hello I tell you my opinion on what this fabulous guitar PRS custom 24 20th anniversary
This guitar is Made in the USA in the fief of Mr. Paul Reed Smith, so there are 24 frets, a special 20th anniversary race with birds (very pretty loool)
micro level we have an HFS in the bridge position and a vintage bass in the neck position (all 2 micro PRS)
for the bridge we have a pretty cool vibrato, quite useful at times ...
found a volume knob and a tone for the pa need more loool, 5-way switch and a rotary is very pratiquemais pa with the usual password
the neck is glued in mahogany

So much for the characteristic

So beware of speaking pa toy is nothing for me c the best round ever made for guitar is the ke fai we want with it seeing how the rhythm pa worry, of course you say solos without er concern pffff what else I really always said looool
access to the treble is super simple I say c perfection, plus the guitar is there too great there too light, and sound then you'll say c beautiful fantasy, uh koi other , there is a twist pa ass shit right for perfection, thanks to the micro splitable ke fai on seeing it all finally carefree styles veiled perfection
I cherished my guitar amoureu following looool course I put 10/10

I play really mainly rock but all of tryo oci oci lot of metallica and (my favorite band) through the rock style nirvana, deep purple etc ...
ac everything works really this guitar I was able to have the same sound in manu Tryo green thumb like I di lool
I play on a mesa F30 ac coupled a korg ax 1500g multi effects and morley bad horsie That a wha and another wha a basic grybaby hearts and I have struggled to set it all but I have my sound I finally found the perfect sound I wanted to thank you depui many years mesa and PRS lool
All this is feasible ac PRS I play country and pa too but I always following some ke pass his fingers in the pif loool

Then I had made another prs 20th anniversary but I had so many interests dessu me exchanging the store against another 20 th anniversary, even more beautiful
So I use this last one month and a half depui a loan can see
First, there is nothing I hate pa ke in this guitar except the price but frankly o ban same price gibson can rahabiller lool
the perfect finish to hit the woods does not default to the PRS
I'm really scratching amoureu that the more one plays the more we love
I have my choice to try a good honest 20 groin guitar through Fender Custom Shop, Gibson Les Paul models as well as all other esp prs, ibanez and I following fall in love with this guitar,
I really had a lot of scratch pa for my young age and frankly I have half the price but I fortunately following mainte if I repeat the same choice Devaya I do it again about 100 000 times veiled loool good day this model is limited and therefore rare, but what a wonder, peace

deam's review (This content has been automatically translated from French)

-The handle is very modern, very fine, very fast.
-Access to acute is impeccable, there is no better.
-The weight is reasonable from a Stratocaster and a Les Paul.
-The sound is huge.

It took me to change a few things for me that it would not.
First the rotary, bof not great, so I did put a toggle switch like the gibson, instead of it.
Yes but you say and sounds of the other intermediate selector and bha I made a pause button switch tonalité.Hé hop sound even more, it allows me to have single coils.
Then I'm not a fan of vibrato on the PRS as or as Fender, now it is blocked.

Nothing scares him.
Blues, Rock, Big métal.Les microphones do everything.
The PRS HFS is amazing full of big lower midrange attack.
The PRS Vintage Bass is for its fat.
Need clear sound not worry, you pull tone knob and you're done.
The sound is between Fender and Gibson.
Between a Telecaster that would have eaten spicy and a Les Paul that would have made a plan.
Like a tuning fork between Start and Gibson can afford to put the cables, it is mounted in 10-52 is a bit harder than on a Start but so much more flexible than a Gibson.

You can do anything with it?
Yeah except the vibrato is not a Floyd so forget the solos to Dimebag Darrell and Kerry King another.
I put 10 because when I bought it I was aware of its shortcomings and I made sure to erase, and then it's beautiful, it's art of violin making.