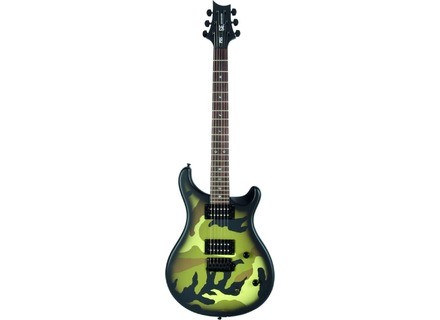 SE Standard Camo, Other Shape Guitar from PRS in the SE series.

PRS SE Standard Camo
5
PRS has been around for decades and for most of that time they were making super high end guitars for professional players. Recently PRS decided to expand their line up to include imported guitars so more players and specifically younger players could afford their guitars. Their imported guitars have much of the same specs as their USA made models and are sold at a fraction of the price. These import models are called the SE models. PRS SE guitars are like the Epiphone or LTD guitars for PRS. This model is clearly based off of the iconic PRS Custom 22 which is one of their most popular models. The SE's main difference is the lack of the carved top the USA model has. This saves a lot of cost in the production process. It has a mahogany body with a maple top and a set maple neck. It has a rosewood fretboard with 22 frets. It has PRS's wide thin neck and two PRS in house pickups. There is a master tone and master volume with a 3 way toggle switch which I hate the placement of. The most obvious feature of this model is its Camo finish. They would never put something like this on one of their USA made models but with these import models being marketed towards a younger crowd this is the type of thing you would expect.

These guitars play great like their USA made cousins. PRS guitars have a unique feel and these import models retain that feel. With the 25 inch scale you get the best of both worlds between the Gibson scale and the Fender scale. The Wraparound bridge is something PRS does best. Any other company putting out guitars with wraparound bridges and I would expect them to not intonate. Only PRS has figured out how to intonate a guitar with a simple wraparound bridge.

PRS SE guitars come with some of the better no name import pickups I have heard in recent memory. A lot of guitars from overseas the pickups are the first thing you toss out. You sometimes have to equate the cost of a pickup swap into the price of a guitar. With these the stock pickups are actually usable. These pickups are decently hot but retain their clarity which is rare in a guitar in this price range. The lack of pickup covers give them a bit extra bite and crunch. I would live with these pickups. They are no where near what you get with a set of specialized aftermarket pickups but they are miles ahead of typical stock import guitar pickups.

For the longest time PRS guitars were out of reach of beginners or casual guitar players. They have a real professional only mantra to them. Now with the SE line normal players and beginners and experiance the great PRS feel and tone. These guitars retain the PRS DNA which makes their high end guitars so great. The price difference between the import models and the USA models is crazy. They probably could have gotten away with charging 1500 for these import models seeing as how their USA model are so expensive. But instead these guitars sell for 6 or 700 dollars which is right where they should be selling. They blow away any other guitar in that area as well.

lerockeur69's review (This content has been automatically translated from French)

The mahogany neck is enjoyable it has a trs trs good speed.
trs good Access in acute
the guitar is also super lightweight lick a sheet !!!!!!
The sound is standard for blues to metal

I use it for almost 3 years
I find it unfortunate that it lacks a good vibrato, and it lacks a bit of medium
I have tried many epiphone model, lag, ibanez .....
super RAPORT money between the PRS and Gibson 1000 I n'siterai not a second choice I will do it again without asking any questions