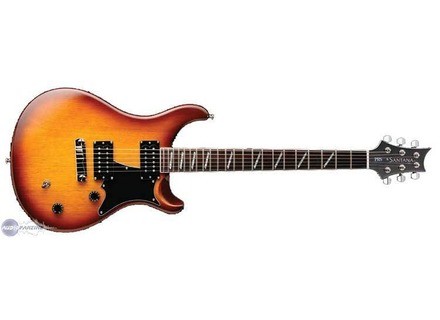 SE Santana - Tobacco Sunburst, Other Shape Guitar from PRS in the SE series.

PRS SE Santana - Tobacco Sunburst
4
The Paul Reed Smith Santana SE is a dual humbucker double cutaway electric with a solid mahogany flat top body, with a body style similar to that of a Fender strat without the tummy cut. The neck is set-in mahogany with a rosewood fretboard and diagonal inlays. Electronically there are two passive PRS humbuckers wired to a three way switch (bridge, neck, and both) and a single volume and single tone knobs. A small pickguard protects the smooth finish from pick marks. The guitar is lightweight with a stop tailpiece (although a tremolo version is available) and has the typical PRS headstock with PRS non locking tuners.

The playability and set up of this guitar from the factory is top notch. The action on this guitar can be set very low without fret buzz and the neck seems very stable. The PRS tuners on this guitar hold tune very well and do not need to be upgraded. The guitar is very comfortable to wear and a joy to play. I like a little more weight to my guitars, but after wearing this for a few minutes I almost forget it’s there. Access to the upper frets is great, so soloing is a breeze. The guitar plays nicely up and down the wide-fat neck, chords do not feel cramped. Switches, jacks and hardware are all very nice and the wiring job is very neat. The pickups leave a little to be desired, they lack some clarity and are fairly low to medium output.

This SE version does not sound like the real deal PRS that I used to own. It does sound and play great for a budget version though. The sound is typical of a PRS, in between a Strat and a LP, but this SE sounds a little thinner. Upgrading the pickups does help add some body to the tone, but the sustain and meat you get from a LP styled guitar with a thicker body can not be exactly replicated. Don’t get me wrong though, this guitar can sound great and really cuts through a dense mix if needed. With a pickup change to some medium output PAF style four wired pickups, a player could add a coil tap and cover anywhere from almost a LP tone to a Strat tone and everything in between.

Overall this is a very nice guitar with super playability. PRS really puts great effort into their quality control and every PRS guitar I’ve played was a treat in it’s own right. They come straight from the factory with a good setup and only need to be tweaked ever so slightly to match the player. This is not my main guitar, I like LPs, but it’s been my backup for several years now and I’ve played it with no problems other than some tarnish on the bridge. The sound of this guitar is very good, but the playability, style, and craftsmanship is just super. PRS knows what they are doing and even these foreign made guitars stand up to their name. I would suggest anyone looking for a PRS styled guitar to stay away from most of the copies and just get the little brother version of the real thing.
Did you find this review helpful?yesno
»

naws's review (This content has been automatically translated from French)

PRS SE Santana - Tobacco Sunburst
4
Solid boby manufactures in core.
22 jumbo frets 2 humbucker prs Standard.
Les Paul-type fixed bridge.
a volume knob and a tonality of an inverter + 3 positions.
the handle is relatively round but be a little bit less than on a Les Paul.

The handle is very pleasant very close to a amricaine
the access to acute is very good for anything wrong ca
Ergonomically speaking little prs is well balanced its weight is good for a guitar mahogany after the form we like it or not!
many music styles are affordable sound is already very good vacuum so very good sustain it just enough to change the pickup lacks a bit of pep for some more metal or other directory if the neck pickup we round out the very sounds bienequilibrs very jazzy wish.

It is perfect for my style of play pop rock
I played on a Vox ToneLab is in Lampl branch of an ac power 30 etje am very happy with my sound!

Buy there are 3 or 4 years it was costing so 1000euros
I have personally changed the pickups for standarts dragons 2 prs and the head of nut replaced by a grafitte.
Now it costs about 700 euros c is a very good little prs which of course is not worth a usa but for the price and making some mods like me you can get an excellent result, saw its very good violin.
then yes I do it again this choice
Did you find this review helpful?yesno
»

Guitar exceptional comfort Thurs Not for Satriani though, once well in hand, you spend what you want. The news is not for me to match this first model that when I look at the bargain price makes me laugh because many scratches much dear fail him at the easel or ankle, as you want

I changed the pickups, a bit light after a few years of use. and then it becomes a killer for a very reasonable price.

If you change the pickups, and you change his key remaining'' LIGHT'' in keeping the agreement in the long run, you have a unique guitar for his comfort Thurs Note that I speak of the first models, which for me has nothing to do with the new.
So if you want to make a deal, buy this model secondhand because at this price you will hardly find better. For my part, I never resell because rather than keep the'' give'' for 300 euros ....

roll mops's review (This content has been automatically translated from French)

PRS SE Santana - Tobacco Sunburst
4
everything has been said. config is rather traditional: 2 HB on a mahogany body. but no table maple handle much Faster than gibs.
finishes are honorable for Korean this range (the sunburst is successful). no binding or other frills, this is a guitar to send the sauce. reperes just add a touch of originality.

handle very end. rather properly balanced and light enough, the grip is reassuring. I regret the lack of progressivity of pot but fans of all donf will be served!
the handle is a treat. everything goes easy on and you find yourself spending plan + quickly than in the past.

rather typical rock and resolutely modern, it will be much more comfortable in large saturation current as well in a light overdrive to SRV.

home, she revived my sleeping in the MT2 Placard
it is precise and bland appearance that was when the gain is low fainted in that attack more severe.

the clean is arbitrary. not bad, not good. on any lamp is better and with a little reverb, chorus or a slight delay discrete, we get a clean acceptable, but funkymen fan or quiet ballads, go your way.

very good or very average, you are warned!


a good guitar for modern styles and advice for beginners who find their voice and who wish to change their very first guitar 1st prize.

for the price of one ear, a cort or a squier, it affects the prestige of a brand that I would never home in American ...

Did you find this review helpful?yesno
»
Read the 5 user reviews on the PRS SE Santana - Tobacco Sunburst »