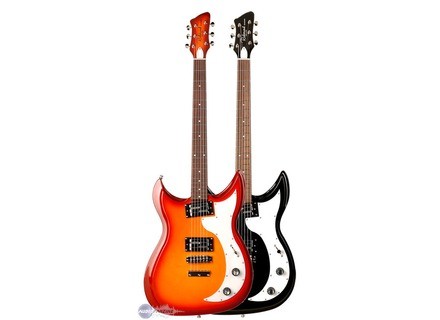 Dorchester, Other Shape Guitar from Richmond.

I have the model with the maple neck ... the neck is the most comfortable I've ever played
super ergonomic guitar light enough ..
access to acute easy but I do not play guitar hero in the genre
palette of sounds quite fine ... four positions,
compared to my other guitars the neck pickup is less powerful in the bass
less shrill bridge position ......
the difference between the two intermediate positions is subtle enough - I think it's a question of phase / out of phase - parallel / series?) - I still do not really understand.
easily obtained a good sound very balanced.
minimal controls, volume and tone but enough --- less time to cut hairs if you're a little obsessive / compulsive like me.

I use a Vox AC15 with a homemade tayden alnico silver bell and a 25 watt ampeg j-20 jet ... well with both although I prefer the vox.
I play everything but mostly trashy pop, garage, psyche.
less crystalline than rickenbacker (I compared with 480), are less serious bass and treble less sharp than my burns steer, but there is a great "growl" of that begins to grow a little the amp asset in maintaining a good articulation of individual notes ... its pretty hairy overdrive ...
this is not to make twangy guitar or surfing.
I used all my needs according microphone positions, except obviously pretty versatile guitar metal.

I bought this guitar on a whim. Attracted by its appearance (I like the guitars a little strange kind burns steer, yamaha sgv800) I then tried ... amazed by the comfort of the handle and its sound qualities. I tested it on a tiny store and terror combo laney lionheart 20 watts.
the guitar sounds good even on a crappy amp like marshall solid state fx30 watt.

I long to appreciate the qualities of this guitar because I have other sounds much more distinctive.
If it is neutral it is still a delight to play. The lace pickups seem very good, very balanced, but I spend little time to test microphones.

I paid 1200 euros with the case ... I rarely exceed 500 euros for a guitar. I sub at the time so I did not ask too many questions. I probably do it again the same choice for the great work and good violin sounds.

Published on 03/22/10
Montreal-based Godin Guitars is getting ready to show the international musical instrument community a number of guitar models at Musikmesse from March 24th to 27th, 2010 in Frankfurt, Germany.

See all 23 photos of Richmond Dorchester »

Other Richmond other Shape Guitars