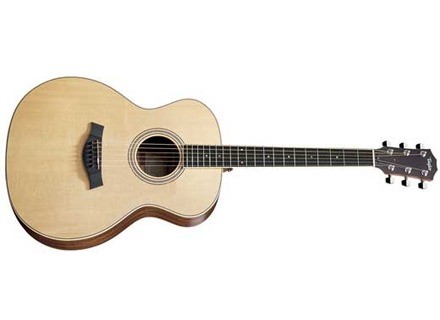 GA3, Other Steel String Guitar from Taylor in the Acoustic 3 series.

Taylor GA3
3
The Taylor GA3 is produced by the company as an offering for people who want a stripped down but well made Taylor that is made in the USA and retails for under $1,500. This one is a grand auditorium sized instrument, and features a solid spruce top, sapele back and sides, mahogany neck, ebony fretboard, and cream binding. Here are the full specs:

It's a well crafted and lightweight acoustic guitar that was built to offer an option to people that couldn't spend $2,000+ on a Grand Symphony model or a 300/400/500/etc series model. The upper fret access isn't too bad, but again, there's no cutaway on this model so it's no better or worse than any other similar acoustic. The grand auditorium shape is comfortable and fits to the body well and the satin finish feels nice to the hand. It definitely feels like a well crafted instrument for sure.

That all being said, if a guitar doesn't sound good, it isn't worth it to me. That sadly was the case with this and every other Taylor I tried, ESPECIALLY when compared to Martins. I don't mean to knock Taylor, as they make a finely crafted guitar, but the sound on this GA3 and many others just falls so short of what a good acoustic should be. The bass is abrupt and jarring, the midrange is scooped and undefined and the treble is brittle, harsh and overbearing in nearly every sense. It sounded more like a guitar that was plugged into an amp or a PA than a true, pure acoustic sound. Sure some people might love that, but for me I just couldn't jive with this processed, brittle sound. Oh well. I guess I'm just more of a Martin guy.

All in all I was disappointed with this guitar. I really wanted to like it, and for the $1,100 or so it sells for, it appears to be a great deal. However, when compared to a similar Martin or Gibson acoustic there really is no contest... it's just too plastic-y and brittle sounding and offers none of the warmth that I feel a good acoustic SHOULD have. I personally opted to buy a solid wood Martin, and if you're after a true acoustic tone I would recommend that you do the same and avoid the Taylors altogether. However, if the more processed "plugged in" tone is your thing you might dig this guitar.

Other Taylor other Steel String Guitars