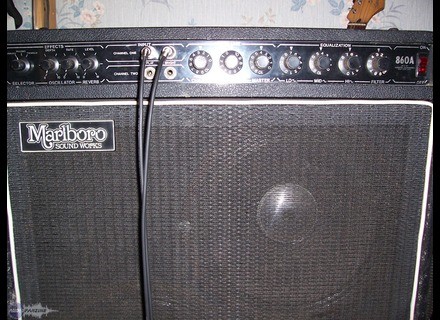 All user reviews for the Marlboro Sound Works 860A

nydaunvan's review (This content has been automatically translated from French)

Marlboro Sound Works 860A
4
- A transistor amplifier manufactured in the United States (New York to be exact), 2 HP.
- Power 150 W it has a lot of connections including 2 channels each with two entries (Flat and Bright), between 1 to connect a head, one between a foot switch.
He also has an output for speakers of 8 ohms and a minimum output prampli. Each channel is controlled through a volume control button + gnral master. The equalizer adjusts Intgr Low, Middle and High for two channels at once (no rglage spar. There's more The Filter button that removes some background noise if it is ncessaire.
- The amp also includes a number of effects including tremolo, a phaser and tremolo use each one in turn (not simultaneously. We pass easily from one end to another using the selector button and you can settle Death, spleen and level with 3 buttons.
- It has a grip of transport, reinforced corners and the box is rather strong.
- It should do well in the 30-35kg for a height of more than 70cm.

The configuration of the amplifier is trs simple, you plug, it works and the APRS SETTING THE basis of the equalizer soon found the sound we want. Good attention this amp is not worth a tube amp but the sound is trs correct, the power dlivrer too. The two big HP have no worries if you follow up a great volume (I rarely Exceeds 4 on a scale of 10 and I take full dj ears). on the other hand no manual, I bought used.

- Well I'm trying to do the mtal then I would say no, the amp do not agree to this because I want to do when he struts CRER the metal struts instead .... trs not known (manufactured between 1970 and 1980) but even when it clings well and despite the asser distos heavy that I am better now sending it the burden of some amps major brand that I could try. By increasing the sound I like it There's much better now for the style I want. If you want to see the stuff I use it, go see my profile.

I use it for some years now and I'm glad trs. The particular feature I like most is the rarity of this amp on the market. Indeed the brand no longer exists and despite my internet research I found that trs few people with this amp or other models of the same brand.
The report quality excellent price struts since I'd pay it in 500Frs There's more to ca 6-7 years.