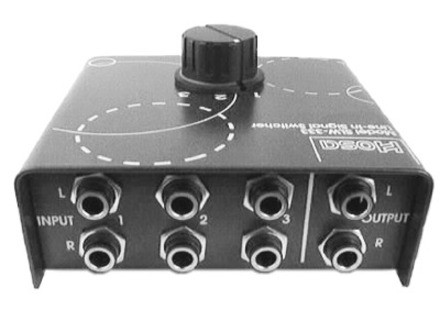 Hosa SLW-333
5
The Hosa SLW-333 is a simple three channel switching box. It allows you to send one stereo signal to three separate outputs and is a unit that I have used for switching between different sets of studio monitors. It simply has stereo 1/4" input connections and three channels of stereo 1/4" outputs. It doesn't require any power and has a knob to choose between the three channels. Like I said, I have used the box for easy switching between different sets of monitors in the recording studio, but I can think of a ton of different uses for the SLW-333 in addition to this use. Hosa has really made it as simple as possible to use this and to set it up, as there isn't very much that you need to know at all. It doesn't affect the sound quality at all, at least that I can hear or that I've been able to compare. In theory it really shouldn't be adding anything of its own and I do not believe that it is. It is built pretty decently, at least for something by Hosa, so I would think that it would be able to have some longevity as long as you don't drop it or anything. The only bad part about the Hosa SLW-333 is the price, as I do think it is a bit overvalued. While it has a nice design and good make up, it doesn't seem to me that it should be worth as much as they are selling it for. However, I can't really think of another product like this to compare it to. I would definitely encourage anyone who needs what is essentially is three way splitter to definitely check out the Hosa SLW-333 to see if it is something that you need or want...