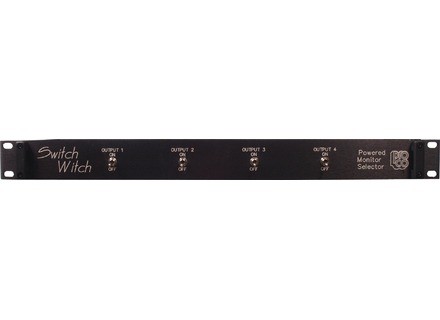 ProCo Sound Switch Witch
5
The ProCo Sound Switch Witch is a four channel powered monitor selector box, designed for quick switching between different sets of monitors in the studio. It has two XLR inputs for sending your console or interface to the box itself, and then four sets of stereo XLR outputs for routing your different sets of monitors to the box. The unit is rack mountable and will take up a single rack space, but in the professional studio where I have used it in, we had it above the console not racked for easier access. I can't think of any other sort of uses for the Switch Witch beyond for being able to quickly switch between different sets of monitors in the studio, but this is essentially a four way splitter, so I'm sure users will be able to find other ways to adapt it if they wanted and/or needed to. I've used the Switch Witch with three different sets of studio monitors - a pair of Adam A7s, a pair of Auratones, and a pair of larger JBL speakers. While most of the time we would keep it set on the A7s, if I was looking to get a different perspective from a different set of monitors, all that needed to be done was to flip the switch on the proper channel. The front panel has on/off switches for each of the channels, so it isn't like you can only have one of them engaged at a time. In fact, you could have all four sets going on at once, or none at all if you so choose. The price of the ProCo Sound Switch Witch doesn't make it the cheapest around, but the price also isn't unreasonable considering the great build and design on this. If you've got three or four sets of studio monitors that you find yourself constantly switching between, the ProCo Sound Switch Witch is definitely the way to go for quick switching and easy routing.