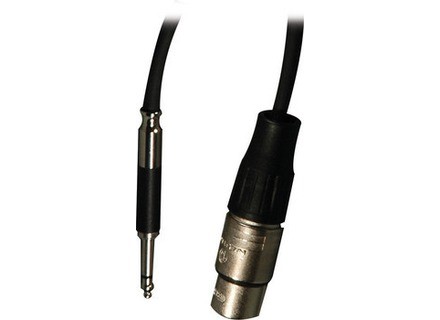 ProCo Sound TTXF3
5
The ProCo Sound TTXF3 is a female XLR to TT cable for use in the recording studio. We've got a couple of these types of cables on hand in our rooms and in reserve at the studio where I work, as they're necessary for plugging microphones directly into the patch bay. I don't tend to do this all the time, but it can be really helpful for times when you're working in the control room and want to set up a mic in there rather than in the live room. They're also useful for hooking up external gear to a patch bay if you don't have any extra tie lines. However, the main thing I've used them for has been for plugging a mic directly into the bay. In any studio with a patch bay it's going to be a good idea to have a few of these, and it's especially important to have them in a professional studio environment where you're never sure what you're going to need next. I've found the ProCo Sound TTXF3 female XLR to TT cables to be as good as any of them out there. Of course you can always get better cables, but for situations where you'd need one of these I don't think it's imperative to have a top of the line, gold plated cable or anything like that. Since it's kind of an obscure kind of cable it's not the cheapest that you'll find out there, but it's not too expensive for what it is and it's worth having them around. Also, I don't think you're going to be finding them for all that much cheaper, although I maybe wrong about this. Either way, check these out if you're going to want to plug microphones into your TT based patch bay.
Did you find this review helpful?yesno
»