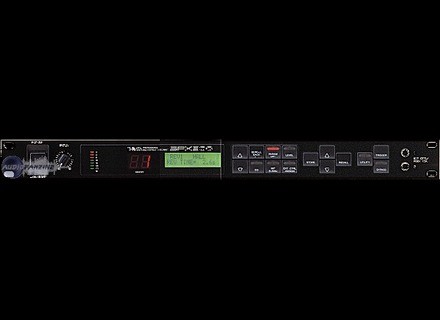 All user reviews for the Yamaha SPX900

Yamaha SPX900
4
The Yamaha SPX900 is a multi effects processor in the form of a rack mountable single rack space piece of outboard gear. The processor is a digital unit and it has XLR connections in the back. It also has 1/4 inch inputs in the front for a foot switch or another type of external controller.

The configuration of the SPX900 takes a bit of getting used to. Like a lot of these early digital effects processors, there are a lot of digital windows to maneuver through, and this can take a bit to get used to. However, once you understand the basics of the unit, it is easy to get the sounds you want from it. It has a lot of different sounds and capabilities, which is the only reason there is somewhat of a learning curve. I don't have a manual for this, so I can't speak to how helpful it is or not, but it is probably useful when learning how to use the SPX 900.

The sound quality of the Yamaha SPX 900 digital multi effects processor is about average. While it has all different types of effects, including reverbs, delays, modulation effects, and others, none of the effects stand out or blow me away. This being said, they are all usable and well suited for a number of different applications. I have used the Yamaha SPX 900 on all types of instruments, including electric guitar, acoustic guitar, lap steel guitar, electric keyboards, and drums. I like the reverb effects best, but all are adequate and usable.

I've been using the Yamaha SPX 900 for about a year and have come to trust it as a handy piece of outboard gear. However, I found myself using plug-ins more and more for effects like this because of the drastic change in ease of use and its comparable sound quality. I believe I can get just as good or better sounds within some plug-ins over the SPX 900, but this doesn't mean that the SPX 900 is useless. The price of these isn't too expensive used, which still makes it a viable option. For those who love the feel of outboard gear and want an all effects in one processor, this is definitely worth a look into.

Bout'chou's review (This content has been automatically translated from French)" Ideal to complement a good reverb!"

Yamaha SPX900
5
It is a multi-effect that different types of reverb. A hall, a room, a flat, and also incredible reverbs Canyon, tunnel and even a reverb effect that simulates a basement!
Y also has a reverb room is called echo effect that impressed me the most. Y also has the effect of delay, echo, chorus, flanger, phaser, tremolo and pitch shifter up to 3 channels.
Y also has a distortion effect and an aural exciter effect. And of panoramic car, compressor, noise gate and effects of a freeze effect that allows a sound sample. Each effect can be equalized and filtered independently!

Already use the fact that all menu access buttons are big and curved greatly facilitate handling. It looks nothing like that, but this time I think it's super comfortable and so nice!
Some programs are a lot of editable parameters, but the fact that Yamaha has settings stored in various different menus allows to navigate quickly is great thought for once. For example, the effects of EQ and filter are stored in the EQ menu are immediately accessible from the button with the same name. Again this is very nice and it avoids having to scroll through countless settings before finding the one we want! Frankly I think it's almost easier than the drop down menu on my M3000!

Well I find quite nice reverbs. They are less attractive than a M3000 for sure, but they are so different, in that suddenly they become complementary. on the other hand are much better than my zoom 1201 which also made serious gadget next to the SPX900.
I also like the chorus, flanger and everything. The effect is called symphonic really nice on a guitar or a bass on all makes. For now I'm not really looked at the effects of noise gate and compressor. The distortion effect is nice too, although it can not really replace a good distortion pedal.
The pitch shifter is really cool, with the possibility of re-inject its already Treaty itself, and especially the possibility of adding a long delay it! It really is class!

Apart from the effect of the echo program room that I find amazing, there is another effect that I find just as great, and that led me to buy this Yamaha. This is the effect of early reflection is fantastic especially programmable wish! it's amazing what you can get with this. Already at the base you can choose several types of reflections and have access to a bunch of editable parameters (sometimes complex), but can also be set to decide yourself, pan each reflection to the left or right of way progressive or not, play their levels and delays! And use it up to 4, A, B, C and D! This is crazy!

It is true that for several programs including effects (max 5), it is not folichon, but it can give a lo-fi genre style. As against those who included two different effects are really not bad, and then they can choose either a stereo or a mono X2 which allows for two completely independent effects on left and right. This is very interesting.

it's a short month that I bought, and of course I have not done the trick. But already I can say is that it's a great camera, although pro also well thought out and built to last, I think it's super important! It is very pleasant to use, although sometimes a bit complex for the novice that I am. But while browsing and especially cogitate, I never came across an insoluble problem.
I love the look too. It may seem silly to say this, but it is very unpleasant to work with something that is ugly.

I'm really really happy with my purchase, it really complete my M3000 and my LXP5. The only complaint I could make is its limited memory space to store edited programs, I find that fifty is not much.
It blows a little too, but it's no big deal and do not forget it very quickly. To give you an idea, unless it blows my LXP5 and much less than my zoom 1201, so it is not catastrophic.

Yamaha SPX900
4
Changing patterns and SPX 90 SPX 90 II, even for audio connection, namely an input jack, two jack outputs, one always chooses the level of work (+4 or -20 dB), the AD / DA conversion is always 16-bit linear, but the sampling rate increased from 31.25 kHz to 44.1 kHz which now leads to a bandwidth of 20-20 kHz maximum. In the audio connections must be added an entry for DIN plug remote remote (RCX 1).

Warning: contrary to what is written in the previous opinion, there is no digital input / output available on the machine.

It should also be noted that unlike the SPX 90, the ballistic peak meter is more accurate because offering more segments.
As with SPX 90, it still offers the effects of chorus, phaser, tremolo .. and an increased amount of reverb. Also present a noise gate, compressor and 2 band parametric EQ, except that now the latter, it can be combined with any other purpose. He also course management capabilities MIDI.

Simple and efficient, as often with Yamaha, impossible to get lost in the menus so it is thought, my little 6 year old daughter knows how to use ..

In factory settings reverbs are pretty sparse, but as soon as we refine them and they are correct via the equalizer board, we can find a certain color much better than at first. They can not be compared with reverb models from the most prestigious course, but it may well help.
Other effects without the endorsement of other models say, more sophisticated, are not ridiculous either. As against the effects of Pitch-Shifter is very good. The few algorithms combining some effects against them are to be avoided, their quality is very average.

Machine age are accused, but nonetheless, still offers a range of very useful indeed. I confess that I use it almost more now, but I helped out so much in a not so distant past that I currently refuse to sell it. And then my little girl loves to play with, so good. I must say that it's terribly funny to change the tone of his voice by pressing a button. One thing the 900 SPX is very, very well also ..

chrisd33's review (This content has been automatically translated from French)

Some beautiful reverb algorithms, cold enough overall. For use on the snare drum rather than the voice. 50% of the combined presets are unusable, for me it's just a reverb.

Been used for years 15aine a concert and reverb mainly on the battery. This effect relationship. Many parameters are not essential to appointment as a tap for the delays. The modulation section is not transcendent except maybe on a guitar for phasing. There was a time I used the symphonic or on low to make it a little out of phase.
It is often found in the racks sondier is a classic, the SPX990 or 1000 is a little better .. For me it is an indispensable outdated.