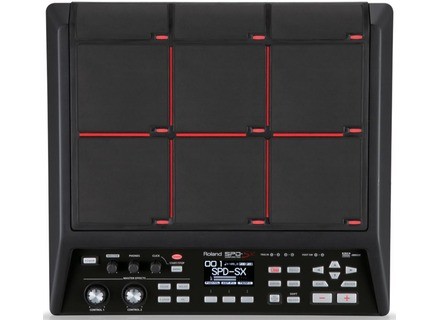 SPD-SX, Multipad from Roland in the SPD series.

All user reviews for the Roland SPD-SX

Average Score:3.0( 3/5 based on 4 reviews )
Value For Money : Excellent
Buy this productView price information >
Not satisfied with those reviews?
Our members also liked:
Buy at Sweetwater

Samidjo's review (This content has been automatically translated from French)" Very Disappointed !!!"

I use the SPDS for 7 years (bought used via audiofanzine). I like this very ergonomic yet rugged machine.
I just bought the SPD-SX (for 1 month) to replace the SPDS and able to return my many sequences and USB inputs "line".

I use it mainly to trigger sequences tempo and sometimes as electronic drums.
Note that I am percussionist and I do not use drumkit wand. And there is the drama !!! While the SPDS is very sensitive, very easy to trigger with a finger, the SPD-SX is a real anvil, on which you have to type much harder to trigger a sound.
The sensitivity was drastically reduced and the possibility for adjustment also. Indeed, the sensitivity settings formerly available on the SPDS 9 pads do now than on the exit "trigger" of the SPD-SX.

More "phrase maker", who liked me repeat my offer acolytes of fatherly impromptu but quantized bin ... it's more possible without his computer, so it's possible.

"He exaggerates" you say ... "it gains time with famous imports into USB". Bin not that much, in fact:

I tried to rotate synchronously 2 sequences from one measurement to 120 of tempo. After 1min they were shifted. I realized, after a good time to turn around, a .WAV sequences was cut too long hair (well, I did not zoomed up on LOGIC to make my cut and it exceeded a little).
Despite forcing the assignment of the tempo of the 2 sequences to 120.0 as well as that of the kit ... nothing to do ... offset.

Morality for it to be running as the sequences are cut by line. So the time saved in USB import is lost in preparation of samples. The system, though most rudimentary of SPDS, works better and makes more mistakes.

What is the sub wave that is triggered at the same time as the main sound assigned to the same pad, since it is impossible to put this sub wave mode "loop"?
Where, on the SPDS, with sensitivity settings, it is possible to trigger two sounds on the same pad?

Good afternoon, I admit, it is convenient to strum on his computer and to name and assign the sounds on the pads
The SPD-SX is also much more ergonomic to route the sounds of the various outputs.

Anyway, with that we will have to beef up my fingers.

You can also use it to play unique sounds (eg, claps, percussion ...) if you do not have pads Electronic and a plug and want benifit space within your acoustic kit .
Moreover it is very good for playing percussion that not necessarily want to invest to play from time to time on some songs and many pro drummers use for this purpose also for ergonomic ease.

The only negative point is that using this type of product, it is dependent on the programmed tempo of samples / sequences, except for the sounds of percussion and other claps and snares and kick drums etc. ... He ' there is no room for improvisation, eg random tempo changes and other improvised arrangements. We can not afford to remove or add measures of the song unless you have re-programmed and edited in advance all the changes you have decided and implemented with your team or at the future concerts.

lolowsky1's review (This content has been automatically translated from French)" RESPONSE"

Roland SPD-SX
It's not Labeled "phrase maker" like the SPD-S, goal dans le SPD-SX it's under the "perform and? Record," qui est letting you record your performance. Page 38 of the manual.
Buy at Sweetwater
Did you find this review helpful?yesno

jermojermo's review (This content has been automatically translated from French)" not bad, not bad at all .."

a sampler is a sampler, then a point of view of sound quality, if it is to launch a sample, it is a loop, the arrangement of a string orchestra 5 minutes or just a sound snare of 808, the SPD-S works as well as the SPD-SX.

Did you have tried many models before acquiring it?


yes, the SPD-S, for several years.

What is so special that you like most / least

+ CLICK settings on each kit! ! ! With a separate output for headphones <3
+ Connected via USB with software to name the kits, import the samples, sort them into folders, and assign the pads in 2 seconds
+ Pads more sensitive than the SPD-S
+ PLAYLIST! ! !
+ Routing easy for each pad, between the master, the sub and headphone
+ Wave normalizer incorporated
+ Effects that sound not too bad

but no matter, I have not purchased for internal samples, it is so easy now to import 200 samples in 10 seconds ...


How would you rate the quality / price?


excellent, as the spd-s is still sold 350 euros and 500 euros secondhand new, buy the version for over 599 euros is not theft.

the "phrase marker" of the SPD-S has disappeared, giving way to a re-sampling, but hey, it's not really the same thing ..

they did a big job on sampling functions incorporated, re-sampling, editing directly on the Wave-spd sx, but I do not use any of these functions at the moment because I prefer to treat my course sounds on my PC with softwares made for that, rather than an LCD 6cm x 3cm ...

I went to the spd-s sx mainly for its USB connection and software to import and assignment. wav, click on its configurable (tired of being on stage 2 machine (spd-s + click)), for its playlists (tired to spend 20 minutes before each concert again by copying a playlist in a sticky mess all this joy because the bass player or guitarist want to change a little something in the playlist

) and for his memory a little bit most important ..

short fills almost entirely my expectations, given the way I use it.