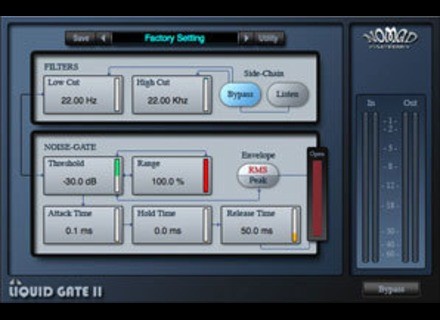 All user reviews for the Nomad Factory Liquid Gate II

Nomad Factory Liquid Gate II
4
The Nomad Factory Liquid Gate II is one of six plug-ins that comes as a bundle in the Liquid II collection of plugs. It's designed for eliminating noise, but can also be used as a more traditional gate/expander. I don't own the Liquid Bundle II, so I can't speak much about the installation process, but I can't imagine that it's too difficult to get it up and running. Using the plug-in couldn't be much simpler - if you understand the basic working parts of a gate, you'll be fine here. The gate section itself gives you parameters for threshold, range, attack time, hold time, and release time, as well as the option of setting the envelope to RMS or peak positioning. There are also high and low pass filters that can be used as a side chain to the gate. The plug-in is real easy to use, so a manual isn't something that should be necessary.

We've got the Nomad Factory Liquid Gate II plug-in and the entire Liquid II bundle currently running on a few different systems at the studio where I'm working. Each room has a Pro Tools HD system, with our main room running it all on a Mac Pro desk top consisting of dual 2.66 Ghz Intel Xeon processor and 10 GB of RAM. This system is more than enough to adequately run this plug-in and the others in the Liquid II bundle as I can't say I've ever had an issue running them.

While the Nomad Factory Liquid Gate II is the plug-in I use the least within the Liquid II bundle, it's still useful and nice to have in a bundle of plug-ins that are mostly effects. It's pretty effective as a noise gate, but when I've used it in the past it hasn't been for this purpose, as I've mostly used it on drums as a more traditional gate. It's good for getting basic noise out, but lacks the in depth detail you get with the Waves noise reduction plug-ins that I have. I consider the Liquid Gate II a nice little extra in a bundle of highly effective plug-ins, all at an extremely reasonable price!
Did you find this review helpful?yesno
Cookies help us improve performance, enhance user experience and deliver our services. By using our services, you agree to our use of cookies. Find out more.