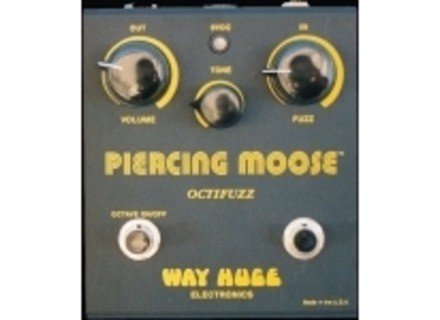 Way Huge Electronics Piercing Moose Octifuzz
5
The Way Huge Electronics Piercing Moose Octifuzz is a fuzz and octave pedal designed for use with electric guitar. I've only used it with guitar so I can't really say if it's sound would translate well to other electronic instruments. The pedal has a simple configuration, requiring nine volt power from a battery or power supply and it has 1/4" connections for input and output. The pedal isn't going to be rackable as it's a stomp box.

The make up of the Way Huge Electronics Piercing Moose Octifuzz won't be hard for anyone to follow as it's only got a few parameters. This includes knobs for volume, fuzz, and tone, which is a standard configuration for many of the world's distortion, overdrive, and fuzz pedals. It also has an independent octave control button which will engage an octave effect in addition to the fuzz. It's cool that you can have it both on and off, as it's a very nice fuzz pedal without it. I've never seen the manual for the Piercing Moose Octifuzz.

The Way Huge Electronics Piercing Moose Octifuzz is capable of getting a few pretty distinct sounds, all of which can be pretty awesome when used appropriately. I love the tone it has when you have the octave on and the fuzz happening at once, and within this it's possible to get a nice collection of different sounds with the different fuzz parameters. Even with the octave option off, it's a great sound fuzz pedal that doesn't muddy up your tone to the point where you can't tell what's being played as you'll find with a lot of fuzz boxes out there. The octave itself is super clean and it's possible to isolate it pretty well from the fuzz with the fuzz parameter turned down.

The Way Huge Electronics Piercing Moose Octifuzz is a unique pedal that probably isn't for everyone, but those who it's for will love it! It's definitely best suited as a side option and not as your main overdrive, but if all you need is a fuzz then it's great for that. The pedal is best for lead guitar parts with the octave on for sure, but as a strict fuzz it's also really cool for rhythm parts. The box isn't incredibly expensive, but it's not cheap so definitely try it out a bit before deciding upon it...
Did you find this review helpful?yesno
»