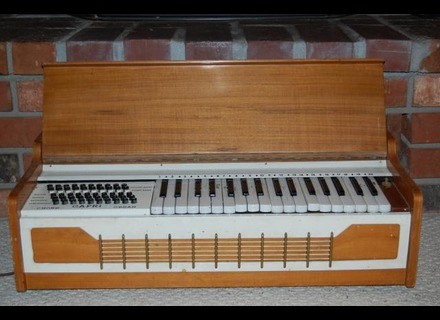 
1 user review
Find it in the classifieds starting at $25 Avg used price: $25

Capri Chord Organ
4
The Capri Chord Organ is an older instrument that I've got experience using in the recording studio. It's a compact instrument that is easy to carry around, although since it's vintage it's somewhat fragile. The keyboard itself spans almost three octaves and has a section of buttons for playing chords. It has pretty much every chord imaginable, for all notes and for major, minor, seventh, and diminished chords. It has full polyphony...

It's not really hard to use the Capri Chord Organ, but it does take some practice to get used to playing the chord buttons and keyboard at once. Beyond that it's not like there are any parameters to control your sound, so it's just playing it that takes some getting used to. I've never seen a manual for the Capri Chord Organ, nor do I think one would be necessary or easily locatable.

The sound of the Capri Chord Organ is pretty awesome. It's somewhere in between an accordion and harmonium, but definitely has a sound of it's own. I wouldn't say that I prefer it to these instruments, but it's a nice replacement if that's the sound you're after and also can stand up on it's own as a cool sounding little keyboard. It's certainly a bit cheesy, but works great in the right situation.

The Capri Chord Organ is pretty rare, but it's a cool little instrument that's a lot of fun to play around with. I've only done a few recordings with this, as a studio I used to work at had it. I don't think it's something that I would seek out again, but having it around was definitely fun and it can certainly be useful when used in the right spot. I wouldn't waste your time trying to seek one of these out, as I don't think you can find one, but if you do have access to one it's definitely worth playing around with.
Did you find this review helpful?yesno
»