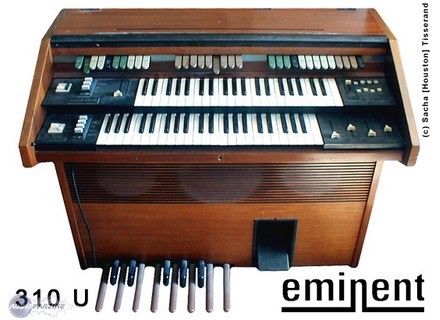 In the top pad sounds.
Perfect for learning harmony.

Use for 1 year
no regrets

eminent2000's review (This content has been automatically translated from French)

It is an organ ... So it's easy, at least for the records.
He may be accused of lack of drawbars, but there's a Hammond!

The string ensemble is beautiful (see Solina).
Other records are in the tradition of theater organs undermine: the TRS end lgant.
It does not replace more than imitate the Hammond but has its own personality.
Perfect for music 7ies.

I use his great ERRF (the 2000GT) and the 310 jou never actually.
But the circuits are the same. The 310 is a machine that marked his era (including some String together) in the studio as scne. It is an organ not to miss opportunity in my opinion ... used in conjunction with a Rhodes, an Odyssey, or a Hammond ... Happiness analog

Eminent 310 Unique
5
Everything has been said in the previous notice, except that unfortunately this type of keyboard, impressive, no longer on the market. Eminent Solina and her cousin were manufactured in Holland by the Eminent plants. Having dismissed 200 people, Eminent abandoned the construction of such keyboards for the general public (despite their prices!) And attacked the market churches and cathedrals, with Organs of the same brand, but focusing on reproduce to perfection the sounds of church organ. Another market .... So when ... Much has been said of Jean Michel Jarre, but little is known as Julien Clerc, in 76 years, with a keyboard called Jean Pierre, who played on stage with the Eminent 310 and the Rhodes piano, the keyboard was placed on the prominent.
I almost have one myself, prominent, but the price, even in France, was quite high for the time ....

Yes, editing sounds is easy, but at that time, everything was pretty easy!

The sounds were then synthetic, but this type of keyboard, impressive!

Excellent keyboard to reproduce the violins (sometimes better than the so-called sampled violins today!), And other sounds, as factories Eminent were the only to offer at that time.