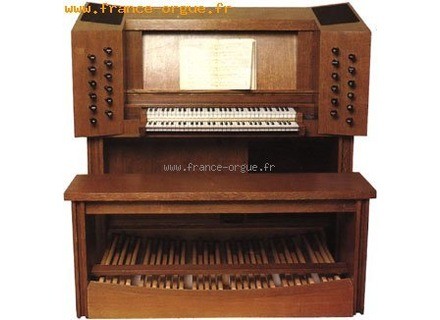 BeyondTheVeil's review (This content has been automatically translated from French)

Hohner DG 24
5
Classical organ with two manuals of 61 notes each and right pedals 32-note concave.
Hit "Organ" (not semi-weighted as the piano but not too "soft." It&#39;s actually quite a hit "dynamic" in that you feel some resistance in the support, but the note back quickly, unlike the hit piano).
Digital technology.

I put 8 because I rather regret the absence of connectivity for MIDI and the lack of connectable grand-orgue/récit, which is highly regrettable! Similarly, the two can not tirasses add up: it&#39;s either one or the other (or is not).

Very simple configuration (ben sounds just pull the tie rods and register it!).
For all that adjustments and programming adjustable combinations, a small keypad located on the right side of the intrument. Only negative: we can still lament the lack of screen to check if it has hit the right combination (it happened to me to repeat several times to complete a set!). Anyway, many classic organs are deprived ...
The manual is very clear and very thin (just read it once to know what type combinations on the keypad to its settings).

Do not expect to do with the sounds of piano or strings, as are any "synthetic". These are purely classical organ sounds (with games such as "main", "Bumblebee," "celestial voice", "supply "...)
The sounds are very nice overall. However, while we can marvel at the realism of the game details (cromorne, regia, cornet (which can cope with the drone 8 &#39;, Flute 4&#39; Flute 2 &#39;, 2&#39;2 Nasard / 3 and third-1&#39;3 / 5 of the story)), can sometimes be disappointed in the full-games and great games that lack depth. Ditto for the organ fund too weak people: a bell of 16 &#39;would have been welcome! To remedy that, I transpose to -5 when I want a fat sound (but that works only moderately). But hey, this is also connectable to the absence of GO / rec.
Another weak point: some games are canceled. For example, the story, all the reeds cancel! We can not simultaneously have the oboe, and cromorne regia, which can frustrate the implementation of some songs that ask, in fact, a good big games.
The trumpet of the great organ is beautiful when used alone, but lousy when it is part of the big game dulcian 16 &#39;of the pedal is very nice in the bass, but does not do well in the treble.
Last point: the reverb (not to hesitate to put the last level) and captures the expression pedal works very well (although the effects are not realistic compared to the expression of a true classical organ).

I have this organ for three years now. Bought used for 19 500 francs, it seems a good price / quality ratio (even occasionally should not be less for such an instrument).
I love the fact that the games are to tie and that the console is dispoée "in window": it&#39;s like on a real organ. There is also the lighting of the pedals and the console, which is fine. I like the sound too, even though sometimes I&#39;m not the one I want.
Clearly, this is a great tool for those who want to start studying the organ and want to have an instrument to study at home. It is an instrument that starts to get old but has not lost its charm.

I made this choice because I dreamed of the organ and the instrument allowed me to take classes at the conservatory. It was a business opportunity in the music store where I used to go. I first flashed on his "little brother" (DG 20) but it was purchased. If another opportunity presented itself (and no more expensive), I probably bought another instrument. But I do not regret that choice.
However, it is currently organs thousand times better. After everything is about money ...
Did you find this review helpful?yesno
»

Excellent instrument. The only one who reminds me of the great console Cliquot which I am co owner
Did you find this review helpful?yesno
»

A sumptuous furniture is best for the organist at a church forum. I will never change against a current instrument
Did you find this review helpful?yesno
»

stephaniegerler's review (This content has been automatically translated from French)

Hohner DG 24
5
<em><strong>I will not go into the trap of technical features that should no longer be the concern here, Whereas the age of the instrument.

Professional, I use this organ for the repetition home because it is by far my opinion the most practical and most solid: no intervention in 20 years, if not a "dpoussi rage "keyboard contacts.

I also approximates the view of My colleagues feel about "wraparound" speaker High qualitfort well disposesvu the very large size of the console, which brings us perhaps more than rcent of any other instrument felt our consoles forums.
</strong></em>
Did you find this review helpful?yesno
»