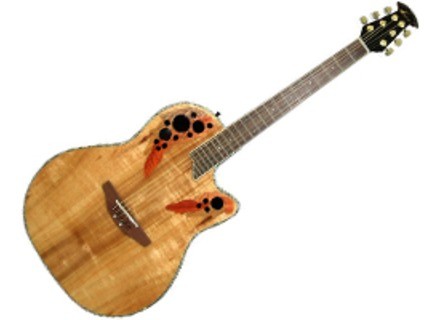 CC44-FKOA, Other acoustic-electric guitar from Ovation in the Celebrity series.

Ovation CC44-FKOA
4
I play mostly folk music (Dylan, Baez, John Prine).
My wife writes the lyrics to songs
which we copyrighted and put up on Lulu.com
My wife has been writing lyrics for about 5 years and I edit them & co-wrote some with her. I also put the mucic to one of ours, "The american Dream" which I perform at open mic. I started playin the guitar in the mid '60's and then like a lot of us,
everyday life was interrupted by time in the military.
After a 40 + year hiatus, i started playing again 3 years ago & besides watching movies with my wife, playing guitar has become a big part of my life.
I own several guitars, all are acoustic-acoustic/electric, except for my Epiphone Dot Studio (which is a beautiful great sounding guitar, in spite of its weighing about 15 lbs.)I play solo at open mic when I am able to & will do so more often in a few years when i retire.


I aquired my Ovation CC 44 at guitar Center in Scottsdale Az. and was lucky that Musiciansfriend.com had it reduced $100.00 & Guitar Center followed suite ( for about 2 weeks, then raised the price again) and the local store honored the reduced price ($299.99), even though they were selling it for $399.00.
Why did I buy it.....I like Ovations because of the unique shape of their back
and they sound good too. and, the different soundholes on the CC 44 make it (Ovation) pretty much, one of a kind.

After you get over the initial unique-ness of its beautiful looks (the honeymoon's over) you then pay attention to what it sounds like.
Unfortunately, you have to clear up "what you don't like about it"
before you can get to what you do like about it.
Likes: unique soundholes.
pickup is most excellent, had to
turn the volume down some .
when properly tuned (I double check the internal tuner with my Korg tuner) it plays beautifully.

Mine was a brand new one, out of the box, not a store floor model. The action was set very low, which I would have loved, except for the frett buzz, which was terrible. I took it to a local music store for a set up, which cost me another $50.00
They did a pretty good job of set up, but it still needed a bit of tuning to get rid of the buzz on the low E string. After that got straightened out, it sounded really good & I'm glad I didn' t have to return it.
It was kind of like a relationship, you had to work at it to get it right.
Overall, considering the craftmanship of this model & the reduced price I would say I am happy .

Finish on it was well done
Frets had been filed pretty well
An overall, beautiful instrument.

If I had to do it over again, I would buy this model, but it would have been good to know that some work & tweaking on equalizer & amp & set up was necessary
before it played & sounded good.

The handle is nice and easy - it's the handle ovation

Ergonomics is good, of course it takes some practice to get back round of applause that does not appeal to everyone because it requires to hold the guitar firmly against you if you do not want it to slip.

The sound is very easily obtained, this guitar has a good projection thanks to its curved body.
It's the sound

ovation but this guitar does not have a massive table, it lacks a bit of richness when compared to the sound of a massive ovation table. Nevertheless it is very respectable for the price of the guitar. I was not disappointed.

I use it since 4 month.
I have not tried to model. This was the realization of a dream: to have a standing ovation and I ordered on the net.

FKOA finish of this guitar is really beautiful. It's been a very beautiful object as much as we love to watch play.

What I like least: the poor finishing on the Chinese model ... varnish over evil on the edge of the side rope bridge and a trace of white paint (thankfully mild) that has been improperly wiped the polish of the handle. For a guitar has almost 400 euros, they could make more effort to finish.

Also note the action set completely wrong: the low E string strongly bordered at the 13th barrette by playing 12th fret. I had to tinker a block of wood (after trying the paper was not satisfactory in terms of sound transmission) thicker low E side steep enough to finish very thin high E side, I put in dock the bridge microphone (note that the block should be based on the entire surface of the micro if there are differences depending on the volume of electro strings ... which is not top). Since I set the action the sound became much better (more toned) and the frieze of the low E string has disappeared. I also made an adjustment handle which was a little too hollow.

Apart from these two points, it remains a very good guitar for anyone who wants and loves his Ovation.

With experience, no I will not go that choice, I think I'll put a little more expensive and take a standing ovation celebrity with a massive table for a little more warmth in the sound.

Other Ovation other acoustic-electric guitars