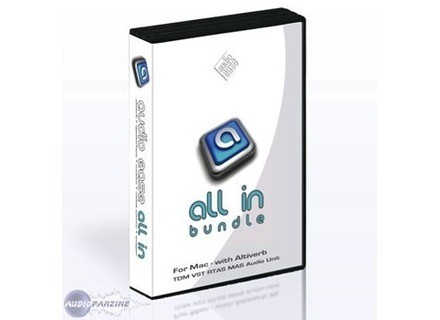 +
Audio Ease All In Bundle REGULAR

All In Bundle REGULAR, Other effects bundle or multi-effect from Audio Ease.

All user reviews for the Audio Ease All In Bundle REGULAR

Audio Ease All In Bundle REGULAR
4
The Audio Ease All In Bundle has turned a lot of people off because of the price. It cost well over a thousand dollars and I was immediately turned off by it because you are getting no hardware and it feels like to much to spend of a software bundle that is not made by Native Instruments. But if you have the money and you are looking for some really good plug ins for your Mac then this bundle has it all. You will get Speakerphone, Altiverb 7, Snapper, Rocket Science Bundle and Nautilus Bundle all with this package.

My favorite out of the bunch is probably the Rocket Science Bundle, because it was something different and I was not use to working with it. It has an effect in it called Roger. Roger lets you have human like filters to your audio signal. That signal does not have to be vocal recording it can be whatever you want it to be and I think it sounds really good with used with some bass guitars.

Snapper is also pretty cool, you can use it to preview your audio files before you bring them into your Pro Tools session. Snapper does not seem like it should have been included in this bundle though because it does not seem like it should be worth much money. It is basically just a Mac Finder, but it does come in handy.
Setting up all of the plug ins was very quick and easy for me. I do not regret my decision at all, but if I had to go back and think about it again I don’t think I would have made the purchase because that was a lot of money to spend and I really only got a few plug ins that I will use regularly. These plug ins are for Mac users only, and should really only be used with Pro Tools to get the best out of them.