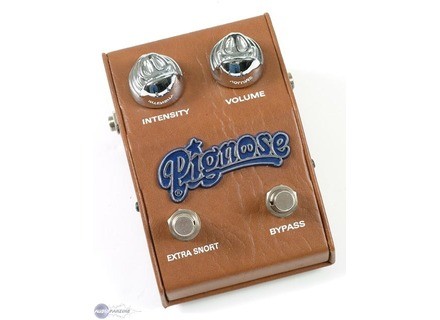 
1 user review
Find it in the classifieds starting at $85 Avg used price: $85

Pignose Detonator S.P.
5
Given that this company's most well-known product is a portable guitar amplifier, I was surprised to find that they also make pedals. This is one of the distortions they make, it could actually be the only one. It is a tube-based pedal that emulates the sound of the 7-100, but gives you the volume that is possible with a large combo or stack. This cannot be edited with a computer, not controlled by midi, and as a pedal, it is not rackable. There is simply a 1/4" input and output, as well as an adapter for a power supply that can come with it.

The editing of effects is generally pretty simple. There is a knob for intensity (gain) and one for volume. There is a bypass switch and a switch called "Extra Snort". This humorously titled switch bypasses the intensity knob entirely, and opts for massive amount of gain. Getting a good sound is pretty easy if you are looking for what this pedal can deliver.

This pedal doesn't really do subtle all that well. This is in no way good for getting overdrive tones, this is distortion all the way. It's actually got some great vintage lead tones, and some not bad rock sounds either. I like this pedal with a Marshall, I actually tend to cool it a bit with the gain on the Marshall's dirty channel and kick this in tandem. It gets a really great lead rock sound that kills, and rocks power chords to the top row. . That's a noisy combo, but with a gate it's not too bad. The extra snarl switch is just too much for me usually, in any circumstance. This pedal is not great for people who don't want to lose their natural tone, as it colors the sound pretty drastically. However, this isn't always a bad thing, as the tone that comes out of it is pretty cool. I like this pedal because it sounds like the Pignose Portable 7-100 legendary, which I am fond of. I don't think it's the best distortion out there, though. I still like it, however.

I think this is pretty cool for fans of the 7-100s sound who'd rather have a pedal than use that amp's "pre-amp out" jack to get the sound they are looking for. This is a pretty cool pedal in general.
Did you find this review helpful?yesno
»