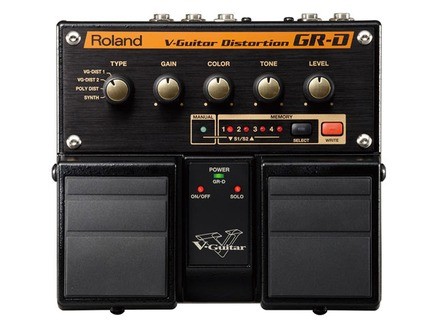 Roland GR-D V-Guitar Distortion
4
It is a multi-distortion pedal. That is to say 6 distortions in parallel, one for each string. It definitely takes you a guitar with a pick up for Divided
have full effect. I've had two weeks and I use it with a Godin Freeway SA. I never tried the GR-100 but according Waine Joness it is close to this.

The grip is very simple. The manual is useful to be able to calibrate the strings individually, but for the rest, we have the direct access controls.

To compare with what I already have, I can say that the sound of the distortion lies between the boss DF-2 and SD-1 super overdrive. You have 4 modes: dist1 vg vg dist 2, poly-synth and distortion. the first two modes are actually standard distortions, except that a lower octave added to the second mode. These two modes are completely irrelevant to me. The lowest octave sounds tinny and not really musical polyphony like effect.

In contrast, poly-mode distortion is why I bought this pedal.
The effect is as if each six guitarists played a note of distortion. That is to say, a super clean sound without any distortion frequency friction. Set to the minimum saturation you have a very interesting sound like a clean sound but with more bite, very good for punchées rhythmic. Set at 40% saturation, there you have the sound of a note multiplied by six. For guitar riffs that immediately spectacular, very ample, we have fun right away bender 2 strings in the treble and then we heard the'' Queen''.

Can be mixed poly mode with the standard sound distortion which is a very good
idea. Dosing with each other gives many possibilities of shades.

They included a synth mode. The controls are very rudimentary filter, resonance,
choice of the waveform and that's all. No attack or release. The sound is digital and it obviously means, not completely zero, but not great. The tracking
on the other hand is impeccable. No latency. I'm used to using a MKS-50 with
my synth guitar and the sound is incomparable.

I have 2 weeks. I wish they would offer a way poly-distortion/synth
with the possibility of dosing the two. I wish that the filter can be applied to
poly-distortion instead of the 2 modes distortion that I probably never will use.

At the construction is solid, the knobs are nice and soft (like toilet paper). The mode dial is it a little too easy, you do not feel much checkmarks.

In summary I am very happy with my purchase. You get used to it very quickly especially its
multi-distortion. I would say that I am unable not to use it. Clancher too easy and have a polyphonic mass with a similar punch. For use with a little chorus and delay.