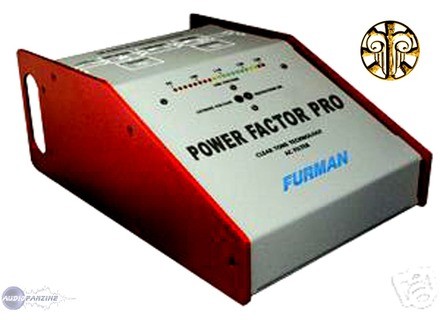 It's a shame that the Furman Power Factor Pro (or "PF PRO") has been discontinued and replaced with a decidedly more expensive version, because these were (and are, though relegated to the used market) great, solid little boxes that sold for a song.

The PF pro is an AC power conditioner whose party piece is to correct incoming AC power factor a little closer to unity, where you want it. It also offers the usual surge protection/spike shutdown, and a fairly healthy current reserve to keep a fast, steady, less impeded flow to plugged in items.

The box is simple, with a decidedly utilitarian look to it, and the features are very familiar to users of other Furman products: the face has no more than the Furman logo, model in big block lettering, and a handy color-coded multi-segment LED input voltage display accurate to 2 volts AC as found on many other Furman products. The rear panel provides access to two duplex outlets for a total of four plug receptacles. In addition, there is a circuit breaker reset switch and the large, high quality red light-up rocker power switch common to other Furmans. Finally, there is a detachable IEC-type grounded mains cord included, which will appeal to pro audio users because it allows for various lengths of power cord to be used, and to audiophiles because it will allow higher end power cords to be substituted (however, I have substituted the stock basic power cord with a VenHaus/Hubbel DIY cord and a Zu Birth and not noticed much of any difference in the performance of this unit--not much point when it's correcting power factor and providing current reserve post-mains cord).

The build quality is sturdy, basic, reliable and of high quality. Though I have not experienced a surge with these particular units, a friend of mine was indeed saved from a lightning storm power surge by his PF Pros which protected many thousands of dollars in connected high end audiophile equipment.

The user must be advised that these units are only rated for 12 amps max so should not be used with multiple current-hungry sources such as high power bass, PA and hi-fi amplifiers that could exceed 12amps total draw.

The PF Pros are great for a number of uses; mine are most typically in the recording studio for tube guitar amps and pedalboards, and at home for running my high end audiophile tube monoblocks (they're medium-low power and don't tug tons of current) and Class A tube preamp. They also work wonderfully for running studio monitor rigs, rack gear (as most studio rack aren't full of super power hungry gear) and so-on. I've seen them put to good use in high quality video rigs as well...really anything that could benefit from steady, clean current, surge protection and improved power factor.

Of course, what the PF Pros can do for you sonically will depend on the relative quality of your mains power supply. If you already have unusually good, steady, clean power at the wall then great, you'll mainly benefit from the surge protection...but for most of us in most situations with less than optimal mains power with the typical heavy loads and noise on the local grid, you will be likely to experience greater clarity and lower noise floor, and sometimes improved punch and dynamics from audio gear on the units, particularly during parts of the day where local grids experience heavier power draws and especially in commercial or industrial areas, and particularly for gear with, shall we say, under-built PSUs. However, again, as ultimate performance is situation-dependent, your mileage will vary.

Although I have have not personally required any servicing of my PF Pro units, I have always received exemplary tech service from the company with my other Furman products. I think they're a very good company to deal with.

In summary, the PF Pros are basic, well built devices which do very well at their intended jobs. The prices were (and are, on the used market) more than fair and I would buy again.
Did you find this review helpful?yesno
»

Other Furman other Misc. Products