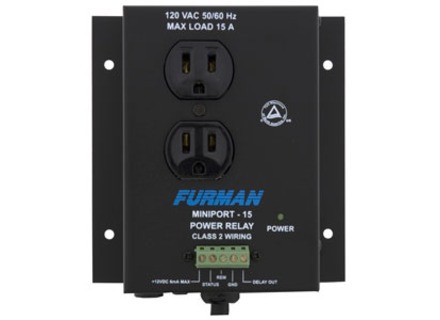 racerevlon's review"I was actually going to build one, but Furman did it for me!!"

Furman MP-15 Power Relay
5
For a long while now I’ve had this idea. My guitar sound system is made up of usually one or more valve amplifier heads, a minimal number of pre-and post-effects (boost pedal, auto wah in front of the amp, chorus and delay in the effects loop) and some basic noise reduction. I connect the pedals via either a Rocktron Patchmate 8 or VooDoo Labs GCX loop, and control everything via a Rocktron All Access MIDI controller. The idea behind this is that I like to have as little as possible at the front of the stage (despite the size of the All Access). Also, I’m a big fan of MIDI and believe that in 2012 the days of the pedal tap-dance should be far off in the rear-view mirror.

A while back I found a great deal on some DJ-style lighting and thought they would be a great fit for a band playing smaller venues that may not have robust lighting systems to augment/enhance/improve the lighting and show. The challenge became controlling the lights. Now, some of the lights have sound activation controls, and there’s always the DMX protocol, but I was looking for something WAY more low-tech… something extremely simple that allowed me to turn these lights on/off at will. I then thought it would be even MORE cool if, for instance, the lights came on, let’s say, when I changed patches for a solo. The problem was, there were no lights or lighting controllers that could be controlled via MIDI. Now, in my guitar rig setup I already have gear that can handle either momentary or relay/latching switching, but none of the lights have any type of MIDI interface or way to be controlled via MIDI. There’s basically the DMX protocol, and the power switch. Well, I didn’t want to invest the time into learning how to program DMX, so I was stuck with the idea of turning a power switch on and off. Not the most attractive prospect in the world.

Leave it to Furman to make it easy on me. In the process of researching for different parts and components to BUILD this piece of equipment I found the Furman MP-15 Power Relay. The MP-15 is a two-receptacle power outlet that has a small control block at the bottom that allows power to the outlets to be turned on and off via Class 2 wiring—a basic contact closure. All I had to do was cut one end from a speaker cable and connect the two ends to the control block on the MP-15. The other ¼” end of the speaker cable plugged right into my Patchmate and with a simple MIDI-controlled toggle I could now turn on/off the two power outlets which in turn would turn on/off my lights, or whatever I choose to plug into the sockets (fog machine, other lights, etc.).

I got the MP-15 installed in my rack, plugged it into my main power conditioner, connected the ¼” cable to my switching station, programmed the MIDI for on/off, and suddenly I had exactly what I had wanted. Every time I step on my patch for my leads/solo the lights turn on. When I go back to my rhythms, the lights go off. The other value-add is that I can assign that port to an instant access switch on the All Access and turn the lights (outlets) on/off at will, not just when I activate my solo patch. So, while the idea is incredibly simple, the implementation would have been incredibly difficult to design, build, and implement on my own. Furman saved me that hassle via the MP-15 for the price of a nice dinner out. The “15” in the MP-15 indicates that the unit will handle 15 amps of current for whatever is plugged into the outlets. Furman also makes a 20-amp model (The MP-20) if a higher load is needed. All in all, the Furman MP-15 Power Relay is a simple an inexpensive solution to one of today’s most perplexing issues… how do you control something that doesn’t have a control interface? Well, as long as it plugs into the wall, the Furman MP-15 Power Relay is your salvation.
Did you find this review helpful?yesno
»

Other Furman other Misc. Products