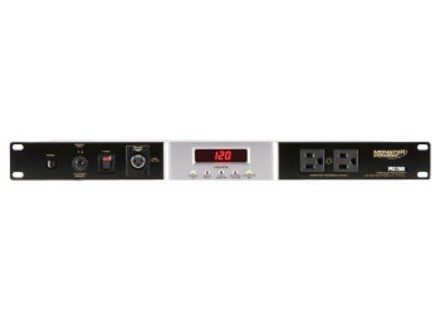 Monster PRO 2500 PowerCenter
5
The Monster Cable PRO 2500 PowerCenter is a power conditioner that gives you stage 2 clean power for powering up all of your studio gear. It's got eight power outlets in the back as well as two extra ones in the front, so it's possible to power up a good amount of gear with each of these. It's also nice that it monitors your power and will make sure it won't overload or anything like that. I believe that it also monitors the voltage and evens it out if necessary, which is something you won't find with too many other standard power conditioners. The unit is rack mountable and will only take up a single space in traditional casings. I recently started working at a band's home studio and they've got two of these in the control room for powering up all the gear, including the Apogee converters, preamps and other outboard gear. It's nice to have a central spot where everything is powered because it also makes it possible to shut everything down with the single click of a button rather than having to power down each piece of gear individually. With the Monster Cable PRO 2500 PowerCenter you're getting more than a simple power conditioner, as it serves as a home base for powering all of your gear and it's designed to make sure that you never have to worry about overloading power and that it's always protecting your expensive gear. The PRO 2500 PowerCenter is going to be more expensive than your average Furman power conditioner, but if you have a lot of expensive gear it's definitely going to be worth it to ensure the safety of all of it. If you just have a few things you want to power, you can probably get away with getting something cheaper, but in general a power conditioner isn't something to skimp on if you have a lot of great gear to protect.
Did you find this review helpful?yesno
»

Other Monster other Misc. Products