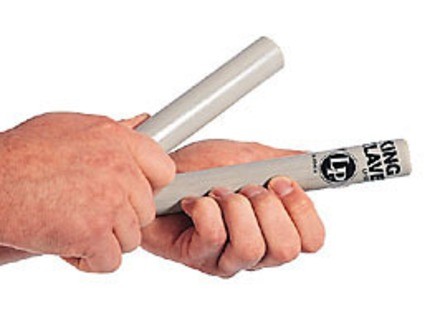 Lp Clave King
4
The LP Clave King is a set of clave percussion sicks as used in a lot Latin music.  I haven't used all of that many different types of claves and I would honestly imagine that most of them sound pretty similar, but I do know that these are made well and do have a good sound to them.  While I don't have much to compare them to, for recording at least these will usually cut through a mix really well and I've never been displeased with the sound that I can get from them.  Even if you don't play Latin music or play music that require clave rhythms, as I usually do not, these can be pretty cool to try out on other forms of music as well as including rock and pop.  They are super easy to handle and to play and I can't say I've ever had any problems with them whatsoever as they are pretty basic and simple in design.  As far as recording goes, I usually will throw up a Shure SM57 or an SM7 and that will do the trick as far as picking up the full sound of the instrument.  While I'm sure a condenser microphone would do the trick as well, it seems that the dynamic mics will pick them up well enough as it is a percussion instrument.  The price of the LP Clave King is incredibly cheap, which doesn't mean that these are poorly made as they are made very well - it is just that this type of percussion instrument isn't that expensive.  If you are looking to add a set of claves to your percussion collection, the LP Clave King will definitely do the trick.  All in all these are priced right and are made by a company that you can definitely trust to give you a quality instrument.
Did you find this review helpful?yesno
»

Other Lp other Non-Chromatic Percussion