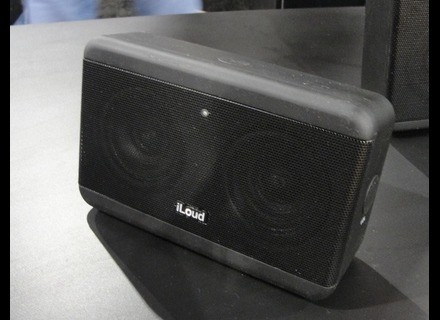 iLoud Mini, Other peripheral or accessory for tablet/iDevice from IK Multimedia.

IK Multimedia will launch in 2013 two new iLoud portable Bluetooth speakers equipped with an iRig Interface and a amplifier with DSP.

The IK Multimedia iLoud is a 40W speaker powered by rechargeable battery, that can be used with any audio system equiped with the wireless Bluetooth technology, and in particular with the iOS devices.

A digital amplifier and DSP processor are built-in, as well as an iRig circuit that allows for connecting a guitar, a bass, a line-level instrument or a microphone.

The iLoud Mini is a 12W version, that does not include the iRig interface.