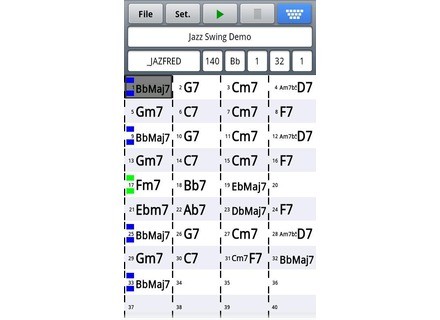 PG Music Band-in-a-Box for Android
4
I have been using the PG Band in a Box for my Droid device (Kindle Fire). When I first downloaded it from the app store I had a lot of concerns and didn’t want to just download something that would be “fun” and pointless. But after giving it a shot, it was fun but not pointless. I do have the Band in a Box for Windows, which I think is required if you want to use or have the Andriod version. The Droid app has a lot of potential that hasn’t been reached yet and I think once they have some more time they will add all of the features that we need. One thing that I don’t like about Band in a Box is that all of the audio files are stored in M4a files instead of .wav or mp3 files. I am sure the M4a files take up a lot less space and that is why they chose to go with that format. But I use so many different arrangers and programs, some of the programs that I use don’t support M4a properly so it causes so many issues with other programs.


I have been using Band in a Box for about 7 months now and I have pretty much explored the whole app. I just use it to mess around whenever I am not around my studio. Since you will be needing to purchase PG Music Band in a Box for windows , keep in mind that that program is around 100 dollars. Which really isn’t much but, It could come as a shock if you think all you need is the 99 cent app. They both go hand and hand.