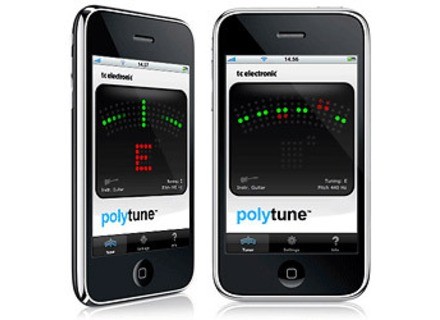 TC Electronic PolyTune iPhone App
I've had the stomp box version of the Polytune on my pedal board since the day it came out. My favorite tuner. I mean strum all strings to check if something is out of tune, in silence between tunes is so the way to go.
When they released it in the app store I was so excited about it that I actually got a 1/4 inch to iPhone adapter because of it. Funnily enough that's not even how I end up using it most of the time.
best example on my last trip to Asia the tuner in my midi board died. So for in-between tuning I actually had my iPhone on my monitor to check that everything was still where it should be after extended whammy abuse coupled with the insane humidity and heat outside vs. dry cold air-conditioned inside in South Asia.

So what does the app do?
It obviously is a scaled down version of the pedal tuner. What you get is the option between bass and guitar. Reference tuning from 435 Hz to 445 Hz. Drop tuning in half steps from E down to C.
And the option to switch between "needle" mode where it looks just like any chromatic tuner that uses a needle as a display. Hit one string and it functions like one too. Hit all strings and it tells you which string is sharp and which is flat. In "stream" mode it look like a strobe tuner when you hit one string. And then when you hit all 6 the same as in needle mode.

The fact there is a tuner that recognizes individual pitches when you hit a cluster of six notes simultaneously is amazing enough. That they were able to do it on an iphone and/or ipad is even cooler. Obviously if you have lots of background noise and an unplugged guitar you will need the cable to plug in. But other wise I’ve found the build in mic to be sufficient.
Did you find this review helpful?yesno
»

vsoleil's review (This content has been automatically translated from French)" Super!"

TC Electronic PolyTune iPhone App
5
This app was free for a few days on the app store, knowing the product pedal, I jumped at the chance!
I'm not disappointed

Super easy to use, does not crash ...

easy to move from guitar to bass

No need to doc, no updates

Function (revolutionary) of multi rope works even with the microphone on the iphone ... too well!

I do not have a pedal tuner, no need.
When I get on stage, I leave my instruments take the temperature of the place ... then I give myself.
I like bass, my bass is less sensitive to heat, and out of tune slightly. So a simple phone PolyTune rolls and ca.

this is too much! It's a MUST HAVE!


His only defect must have a minimum of silence around, the microphone picks up the iphone really.

paulstratos's review (This content has been automatically translated from French)

TC Electronic PolyTune iPhone App
1
Here are just a rsum.
I download, I pay and I want to use the application. just the message on the iPod:

ok, I knew we could not use this ... without having to plug the guitar ... So j'achte an adapter and I plug:

here it is great, APRS 2hrs on the forums or apple or tc, share anything ... there is no explanation for nophytes. I pod touch

Tionline's review (This content has been automatically translated from French)" Redoutable"

TC Electronic PolyTune iPhone App
5
Installation without problem on an iPhone 3G. No special configuration, it uses the microphone.
I did not see if there was a manual, and I do not see how useful it might come in ...

Performances are excellent and the reactivity of the perfect software.

This software is extremely handy in some situations where traditional tuners inefficient.
The agreement notes rating is not necessarily faster than other software, but the simultaneous agreement of all the strings is pretty amazing

When I have ten guitars to give the result, I make a time not possible.

Value for money on top, I got it for free at its output. But for 8 €, it is not theft, trrrrrrrrrrès far from it!

1 Published on 12/16/10
TC Electronic has announced that a new version of its PolyTune pedal tuner app is now available in the Apple App Store.

Other TC Electronic other software for iPhone / iPod Touch / iPad