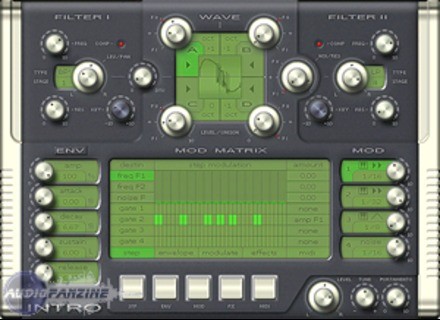 Colin Christian's review (This content has been automatically translated from French)

BK Synthlab Intro [Freeware]
5
Welcome! A short text to praise the passing of this little VST MRIT that resemble, as one friend pointed out to me, a dashboard of an old Russian submarine. Since I started the virtual, there are about four months, I tested over 300 VST (read my review Rapture, STS 26) and my ears do not deceive me. a ring or not ring! And in this case i was a surprise the extent of the sounds that filled the whole pice, rich and bold. A sound particulire, unique apprcies my ears quickly through the monotony of many VST reptitive. I had no problem the instalation. His look reminded me that before my premmier synth Roland System 100 modular patch in 1972 (I was 20) I was playing sounds on frquences old radios. The look is similar to the VS-1 and other models of the same company. And besides the sound of Intro to have a je ne sais quoi that make Vintage (grain may be) but better, without trying to copy them.

No problem to drive it. But with little power in the stomach.

I'll be honnte. I have not had time to test it back since I played on many a time right now. But I know that its potential is quite large even without taking into account that it is a freeware (free). He beat several small VST catgories all confused. It works with four waves that have selected an array of 64 and are led by two, then two filters to quite complex. Little envelope, 3 LFOs, 1 quorus delay but also a fairly good step modulator, a modulation matrix and a curious window, which I think is connect the components of a fawn diffrent other than in the matrix. Pardon my lack of experience on this device yet. But what I am is that sr Intro to dmarque all its obviousness sounds that make me frmir skin. It's physics! I'm a fan of soft background music and this synth is the opposite of my attractions. So if I mention that it is undeniable advantages possde o I ct a hard cover. I think he can project powerful sound trs (but not discordant for a good ear), plain (but not to the point of being a cacofouillis) and particulires (but not weird to the point of not be used easily). It should be a efficae scne. He immediately catches the Premire costs. Go! do me a favor. Try it. It's free! May be he will never in one of my compositions. But even if only for my frmir epidermis of the fawn particulire Intro, from time to time, I keep it. Bye!